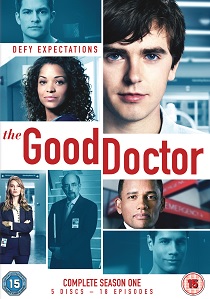 The Good Doctor: The Complete Season One (2017)

Alone in the world and unable to personally connect with those around him, his only advocate, Dr. Aaron Glassman (Richard Schiff), challenges the scepticism and prejudices of the hospital's board and staff when he brings him in to join the team.

Shaun will need to work harder than he ever has before, as he navigates his new environment and relationships to prove to his colleagues that his extraordinary medical gifts will save lives.

The Good Doctor: Season One is released on DVD 8th October 2018 from Sony Pictures Home Entertainment.

HotDVDBDUHD
From the acclaimed director of fan-favourites such as Baby Driver, Shaun of the Dead and The World's End comes the tribute to 1960s London in Last Night In Soho, available to own on DVD, Blu-ray and 4K UHD 31st January 2022 from Universal Pictures (UK). END_OF_DOCUMENT_TOKEN_TO_BE_REPLACED
Top PicksView