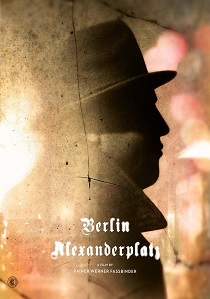 Starting life as a German miniseries and weighing in at a some 900-plus minutes, Berlin Alexanderplatz has been described as the longest film ever made. Adapted and directed by Fassbinder from the Alfred Döblin novel of the same name, it originally aired on TV in 1980. Now this seminal masterwork arrives as Berlin Alexanderplatz Limited Edition Box Set on 23rd July 2018, complete with a luxury 60-page perfect bound book and a host of standout special features including an appreciation by writer and critic Tony Rayns the acclaimed documentary Fassbinder: Love Without Demands, a visual essay by Daniel Bird.

Franz Biberkopf is an unforgettable man: good-natured, soft, tender, but also hard, violent and brutal. Released from prison following a four-year sentence for the manslaughter of his girlfriend, he plans to make a new start and a decent life for himself. But a chaotic, decadent Berlin of the 1920s is not the easiest place for an ex-con to go straight and work is hard to come by. When Franz becomes fascinated by Reinhold, a psychotic small-time crook, he is soon drawn back into a world he cannot escape.

Starring Günter Lamprecht (Das Boot), Claus Holm (Tiger of Bengal) and Hanna Schygulla (The Edge of Heaven), Berlin Alexanderplatz is pure genius and in a league of its own.

Related Articles
Lola, World On A Wire: Limited Edition
What Have You Done to Solange?
Comments
Hot Pick

HotDVDBDUHD
After more than thirty years of service as one of the Navy's top aviators, Pete 'Maverick' Mitchell is back where he belongs as Top Gun: Maverick flies onto DVD, Blu-ray and 4K UHD 31st October 2022 from Paramount Home Entertainment. END_OF_DOCUMENT_TOKEN_TO_BE_REPLACED
Top PicksView