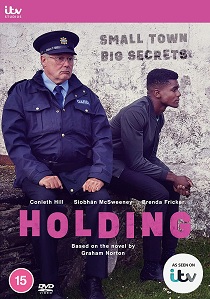 Olivier award winning actor, Conleth Hill (Game of Thrones, Dublin Murders, Vienna Blood) plays local police officer Sergeant PJ Collins, a gentle man who hides from people and fills his days with comfort food and half-hearted police work. He is one of life's outsiders, lovable, but lonely and a bit rubbish at his job.

When the body of long-lost local legend Tommy Burke is discovered, PJ is called to solve a serious crime for the first time in his career. Unearthing long buried secrets, PJ finally connects with the village he has tried so hard to avoid.

Siobhán McSweeney (Derry Girls, Nowhere Special, Anthony) plays vulnerable, messy Bríd Riordan. Bríd had been due to marry Tommy before his untimely disappearance, whilst Charlene McKenna is youthful, stuck Evelyn Ross who desperately loved him. The two women are at the heart of the community and neither is above suspicion.

Brenda Fricker plays Lizzie Meany, a shy presence in PJ's life who has been battling her own demons and secrets as PJ comes to discover...

DVD
One of the most compelling and conflicted characters in Sony Pictures Universe of Marvel Characters comes to the big screen as Jared Leto transforms into the antihero Michael Morbius as Morbius is released on 4K Ultra HD, Blu ... END_OF_DOCUMENT_TOKEN_TO_BE_REPLACED
Top PicksView