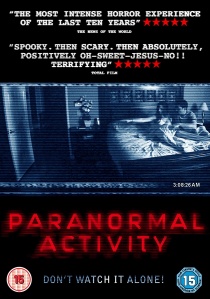 Icon Home Entertainment is pleased to announce the 22nd March 2010 Blu-ray and DVD release of the horror phenomenon that is Paranormal Activity. Directed by Oren Peli and having grossed over $100 million dollars in America, it has now exceeded the £10 million mark at the UK Box Office. Hailed by Harry Knowles as "one of the scariest at-home viewing experiences ever", this truly terrifying film is now primed to frighten the hell out of people in the safety of their own homes!

The presence seems most concerned with Katie, a student who has felt "haunted" her whole life. Her boyfriend, Micah, a day-trader, becomes fixated on learning as much as he can about the phenomenon. Technologically savvy and a lover of toys, Micah spends a few thousand dollars on a high-definition video camera and sets it up at the foot of their bed, creating at once the most intimate of tableaux and an evidentiary medium.

The arrival of Micah's new toy seems to trigger an escalation of paranormal activity, causing Katie to observe that the presence "doesn't like it." As the video tape rolls, Katie becomes increasingly distant while Micah's fascination grows into obsession.

DVD
The end of the line is only the beginning in a wild, non-stop thrill ride through modern-day Japan as Bullet Train is released on DVD, Blu-ray and 4K UHD 24th October 2022 from Sony Pictures Home Entertainment END_OF_DOCUMENT_TOKEN_TO_BE_REPLACED
Top PicksView