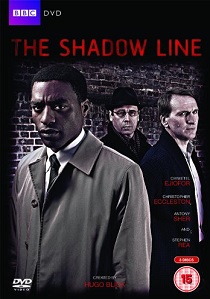 Chiwetel Ejiofor, Christopher Eccleston, and Stephen Rea star in this major new BBC drama written, produced and directed by Hugo Blick. A sophisticated conspiracy thriller in seven parts, that brings to life a cinematic world of blurred morality and the conflicted characters who inhabit it, The Shadow Line is released on DVD and Blu-ray on 4th July 2011 from 2entertain.

When police officers discover the body of a man, shot at close range, they soon realise the victim is Harvey Wratten, head of one of the UK's largest crime organisations. Having served two years of an 18-year sentence for his part in importing £11 million worth of heroin into the country, Wratten had only just been released from jail under the very rarely obtained royal pardon.

Assigned to investigate Wratten's death is Detective Inspector Jonah Gabriel (Ejiofor), in his first case since being shot during a botched police operation that left his partner dead. He has amnesia, caused by the bullet still lodged in his brain, which leaves him doubtful of his own moral compass and his colleagues regard him with suspicion. Gabriel has to follow an increasingly complicated line of investigation, all the while wondering whether he can trust anyone, not least, himself.

On the other side of the line is Joseph Bede (Eccleston), an associate of Wratten's, who has built up a legitimate fruit and flower business during Harvey's time in prison. Now, driven by a profound personal tragedy, Joseph finds himself planning one last deal: a massive drugs operation that he is desperate to see through, so he can retire and step out of the business for ever.

Watching from the shadows is the brilliantly lethal puppet master - Gatehouse (Rea). He knows how to find people. He knows their secrets and he'll find them when they are at their most vulnerable.

As Gabriel begins to unravel the threads around Wratten's organisation, the web of intrigue becomes more complex - and the line that divides the players becomes increasingly blurred.