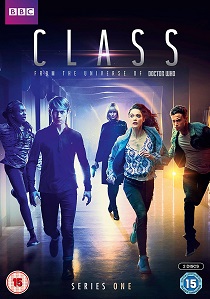 It's a new term at Coal Hill Academy, and students are preparing for their Autumn Prom. But when the school comes under attack from deadly monsters, four alienated students must form an unlikely alliance to defeat them.

Like all teenagers, these four students have hidden secrets and desires. They are facing their own worst fears, navigating a life of friends, parents, school work, sex, sorrow - and possibly the end of existence. And this incursion is only the beginning...

Charlie, April, Ram and Tanya, under the watchful eye of Physics teacher Miss Quill, are now charged with a great responsibility by the mysterious alien known as The Doctor: protect Coal Hill and guard against the creatures of nightmare that want nothing more than to find a way through to Earth and take it for their own.

From the universe of Doctor Who, Class: Series 1 is released on DVD and Blu-ray by BBC Worldwide on 16th January 2017.

HotUHD
Say the 'B' word three times and have a wonderful Day-O as Tim Burton's Beetlejuice arrives for the first time on 4K UHD 31st August 2020 from Warner Home Video. END_OF_DOCUMENT_TOKEN_TO_BE_REPLACED
Hot PicksView