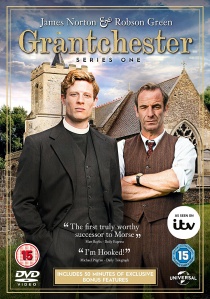 It's 1953, and Sidney Chambers (James Norton) is vicar of Grantchester, a village just outside Cambridge. Sidney's is a quiet life. Or at least, it has been - right up until the moment that murder comes his way... Pushed into the dangerous world of lies, betrayal and murder, Sidney quickly finds that his insight into the human condition, and the natural trust that he engenders in people, means that he excels in his new position as 'detective'.

Joining Sidney as he journeys into this dark world is the affable but world-weary Detective Inspector Geordie Keating (Robson Green), the naive, but well-meaning curate Leonard Finch (Al Weaver), and his austere and constantly disapproving housekeeper Mrs Maguire (Tessa Peake-Jones). But crime isn't the only matter that occupies Sidney. He's smitten with the witty, beautiful, Amanda (Morven Christie), but could high society Amanda ever be allowed to marry a lowly country vicar? Can you still see the best in people when the world of murder asks you to see the worst?

HotDVDBDUHD
From the acclaimed director of fan-favourites such as Baby Driver, Shaun of the Dead and The World's End comes the tribute to 1960s London in Last Night In Soho, available to own on DVD, Blu-ray and 4K UHD 31st January 2022 from Universal Pictures (UK). END_OF_DOCUMENT_TOKEN_TO_BE_REPLACED
Top PicksView