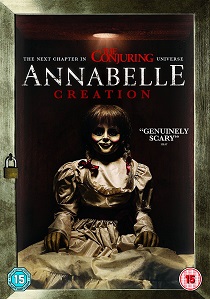 Your favourite creepy doll is back when Annabelle: Creation arrives on Blu-ray, DVD and Digital Download 4th December 2017 from Warner Home Video. From New Line Cinema comes Annabelle: Creation, with David F. Sandberg (Lights Out) helming the follow up to 2014's hugely successful Annabelle, which scared up nearly $257 million at the worldwide box office during its theatrical run. The new film is once again being produced by Peter Safran and James Wan, who previously partnered on The Conjuring hit movies.

The Blu-ray discs of Annabelle: Creation will feature a Dolby Atmos® soundtrack remixed specifically for the home theater environment to place and move audio anywhere in the room, including overhead. To experience Dolby Atmos at home, a Dolby Atmos enabled AV receiver and additional speakers are required, or a Dolby Atmos enabled sound bar; however, Dolby Atmos soundtracks are also fully backward compatible with traditional audio configurations and legacy home entertainment equipment.

In Annabelle: Creation, several years after the tragic death of their young daughter, a doll maker and his wife welcome a nun and several girls from a shut-down orphanage into their home. They soon become the target of the doll maker's possessed creation, Annabelle.

BD
A 13-year-old girl named Meilin turns into a giant red panda whenever she gets too excited in Disney and Pixar's 25th feature film Turning Red, released on DVD, Blu-ray and 4K UHD 2nd May 2022 from Walt Disney Home ... END_OF_DOCUMENT_TOKEN_TO_BE_REPLACED
Top PicksView