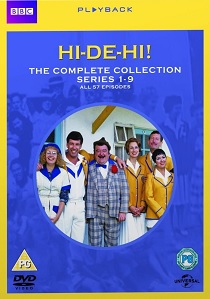 From the legendary Jimmy Perry & David Croft comes the Complete DVD Collection of that hymn to the great British holiday, Hi-De-Hi. Thanks to Universal Playback, From 2nd November 2009, when we are dreaming of winter sun, wallow in this heady brew that is part Carry On-style farce, part class comedy and part nostalgic romp.

Based on Perry's own experiences working as a Butlin's Redcoat following the war, it was set at the fictional Maplin's holiday camp in 1959. As the new season starts, the staff are baffled to discover the place is now being run by Jeffrey Fairbrother (Simon Cadell), a Cambridge archaeology professor who's looking for a change of scene. The bashful, softly spoken boffin is clearly ill-suited to his new posting and immediately provokes the ire of comic Ted Bovis (Paul Shane), a shyster of the first order who had his eye on the job.

Weighing in with ten series' and 58 episodes, Hi-De-Hi was one of the very biggest comedy series of the '80s, regularly drawing in 13 million viewers and won the BAFTA for Best Comedy in 1984. And as if in tribute, newspapers are reporting British holiday camps are set for a comeback this credit-crunched summer as families save money by spending their breaks at home. Hello, Campers!