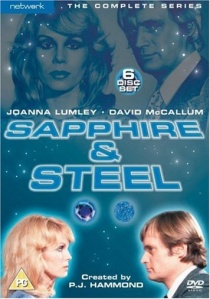 NewsDramaJoanna LumleyDavid McCallum
News Article Go back to homepage
Sapphire And Steel will capture your consciousness and transport you to altered states. With their uncanny powers they protect the present from malign forces from the past and future, the DVD is available to buy on 5th November 2007 from Network.
Joanna Lumley, David McCallum, David Woodcock, Tom Kelly, Gerald James, David Collings
David Foster, Shaun O'Riordan
David Reid, Shaun O'Riordan
Network
14 hours 10 minutes
05/11/2007
Thank you for supporting DVD365.net when you order using the link(s) below. As an Amazon Associate we earn from qualifying purchases
Buy DVD
Information

Set in a world in which the future and past collide and time overturns reality, Sapphire And Steel will capture your consciousness and transport you to altered states. Eerie, frightening forces are at work and Sapphire and Steel have been assigned...

Only Sapphire and Steel (Joanna Lumley and David McCallum) can stop the strange events and restore natural order to the universe. These two superhuman agents have been assigned to safeguard the structure of Time. With their uncanny powers they protect the present from malign forces from the past and future.

This set is elemental to any DVD collection and available to buy on 5th November 2007 from Network.

Though-provoking, unsettling and powerful drama with a supernatural twist, Sapphire And Steel was created by acclaimed TV writer PJ Hammond (Torchwood, Ace of Wands). The show built up a massive cult following when it was originally broadcast on ITV nearly thirty years ago and remains a much talked about show to this day.

Related Articles
Finding Your Feet, Absolutely Fabulous: The Movie, Absolutely Anything, Jonathan Creek: The Clue of The Savant's Thumb, Cold Comfort Farm, Finding Alice
A Traveller in Time
Frankenstein: The True Story, The Invisible Man, Return Of The Man From U.N.C.L.E., The Invisible Man: The Complete Series
Comments
Hot Pick