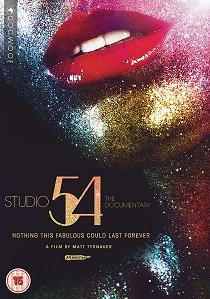 Casual sex, mounds of cocaine and beautiful stars, infamous NYC nightclub Studio 54 was the epicentre of 70s excess and hedonism. Illustrating the glamour, acceptance and exclusivity contained inside the most significant nightspot in cultural history, Studio 54 lands on DVD and Limited Edition Blu-Ray and DVD from 6th August 2018, courtesy of Dogwoof.

With rare footage, a parade of colourful patrons and staff, and brutally honest interviews with notorious owner, Ian Schrager, Studio 54 is a riveting study in contradictions. The palatial theatre-turned-disco had an atmosphere of total acceptance, whether drag queen, octogenarian, waiter, or celebrity. Yet outside, a frenzied, excluded mob yearned to catch the eye of the doorman and beckoned to be ushered into the sanctum of pulsating love. The glittering club sprang from carefree naiveté and unbridled ambition - yet those same instincts managed to destroy it.

Directed by Matt Tyrnauer (Valentino: The Last Emperor), Studio 54 provides unbridled access and often brutally honest insight into the nightclub that people were dying to get into. The bracing story of how two best friends from Brooklyn, Schrager and Steve Rubell, founded the most talked about hotspot of an era reveals how even a potent and culturally transformative phenomenon can be vulnerable and fleeting.

Experience the dazzling club in all of its former glory and discover the foibles that led to its (and its owners') demise, when Studio 54 releases on home platforms.

HotDVDBDDIGITAL
With stunning revelations, glamorous journeys, and the arrival of the Jazz Age, Downton Abbey: A New Era, released on DVD and Blu-ray 15th August 2022 from Warner Home Video, will be the Crawleys' biggest adventure yet as they grapple with their future and new intrigue about ... END_OF_DOCUMENT_TOKEN_TO_BE_REPLACED
Top PicksView