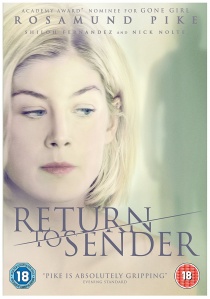 }Gone Girl meets Misery in a tense and unforgiving psychological thriller, starring Academy Award Nominee Rosamund Pike proving once again that she is the star to watch in 2015. Unafraid to break new ground, Return To Sender will leave audiences wanting more as it dares to challenge with unexpected turns and surprises.

Following his arrest, she starts to write to him but the letters all get returned unopened. Determined to confront him she then starts to regularly visit him in prison and seemingly befriends him, against her father's (Nick Nolte; Cape Fear, Warrior, 48 Hours) express wishes.

Unable to understand his daughters intentions he fears for her safety come the time her assailant is released...but has he underestimated her strength and resolve?

Related Articles
Hostiles, The Man With The Iron Heart, Hector And The Search For Happiness, Gone Girl, What We Did on Our Holiday, Jack Reacher, Wrath Of The Titans, Surrogates, Fracture, Die Another Day, The Negotiator, Entebbe, A Private War, The Informer, Radioactive, Radioactive
A Walk In The Woods, Gracepoint, Luck: Season 1, Warrior, The Hulk: Special Edition, The Thin Red Line, Head Full of Honey, Angel Has Fallen, Angel Has Fallen, The Prince of Tides: Criterion Collection, The Deep
Cop Car, The Practice: Season 1 & 2
247 Degrees Fahrenheit, Life Blood, Zombies
White Bird In A Blizzard, The East
Comments
DVD Releases News Pick