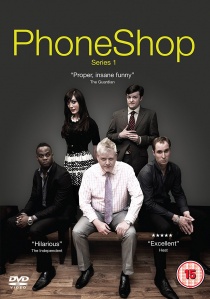 The high street is a dangerous battle zone. On the frontline are the brave soldiers of the PhoneShop sales floor. Following its fantastic success on Channels 4's Comedy Showcase in 2009, this well observed and sharply written sitcom won critical acclaim and a cult-following (with Ricky Gervais, Stephen Merchant and Harry Enfield among its fans). Learn the tricks of the trade from the best sales team in Sutton as PhoneShop - Series One comes to DVD from 2entertain on released on 14th November 2011.

On the mean, cut-throat UK high street, the priority is to 'shift units, make money, smash targets...' and no one knows that better than the staff of PhoneShop. But with top salesman Little Gary Patel back in jail, the staff's position as 'Kings of the High Street' may be in jeopardy for the first time.

Store Manager Lance has a secret weapon in the form of new recruit Christopher; fresh from the world of academia (he has a degree in sports science and hotel management). But Lance's young protégée looks more damp squib than battle-ready expert. It's up to phone-selling machine Ashley, self-acclaimed ladies man Jerwayne, despite still having a single bed at his Mums house and Janine - the elite Sales Professionals - to knock this eager-to-please, bag of nerves into shape.

Together it's their job to make sure that every mug punter within five square miles gets locked down to the tightest and most expensive mobile phone contract known to mankind.