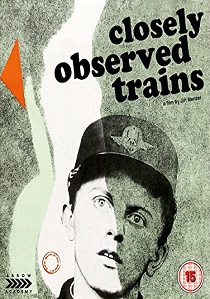 Shy teenage virgin Milos gets his first job as a railway dispatcher and is suddenly forced to confront the realities of the adult world, not least the temptations of the opposite sex. But they in turn are more attracted to his more experienced colleague Hubi ka and his distinctive way with an inkpad and rubber stamp...

This could easily have fuelled a light comedy, but Ji í Menzel s bittersweet feature debut is set during World War II in Nazi-occupied Czechoslovakia, and the various farcical goings-on threaten to distract attention from the far more pressing business of staying alive especially since German trains are being attacked by resistance fighters and everyone is under suspicion of collaboration.

Co-written by the great Czech novelist Bohumil Hrabal (author of the classic source novella), Closely Observed Trains, released on dual-format Blu-ray and DVD on 26th October 2015 courtesy of Arrow Academy, won Menzel a Best Foreign Film Oscar when he was still in his twenties, and it remains one of the best-loved of all Czech films.

BD
An intimate and moving story of childhood memories, Belfast is available to own on Blu-ray and DVD 25th April 2022 from Universal Pictures (UK). END_OF_DOCUMENT_TOKEN_TO_BE_REPLACED
Top PicksView