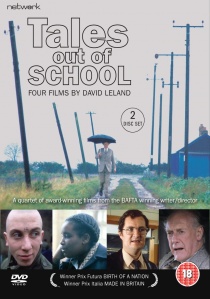 Tales Out of School: Four Films by David Leland (1982)

NewsTV SeriesDrama
News Article Go back to homepage
Featuring early roles for Tim Roth and Jim Broadbent, Tales Out of School: Four Films by David Leland, released on DVD and Blu-Ray by Network on 4th July 2011, form a scathing portrait of British society in the early 1980s, focusing in particular on the polarisation of attitudes towards the role and methods of education in an increasingly fragmented society.
Sean Chapman, Geoffrey Hutchings, Eric Richard, Bill Stewart, Terry Richards, Tim Roth
Alan Clarke
Margaret Matheson, Patrick Cassavetti
Network
1 hour 16 minutes
04/07/2011
Thank you for supporting DVD365.net when you order using the link(s) below. As an Amazon Associate we earn from qualifying purchases
Buy DVD
Buy BD
Information

Tales Out of School: Four Films by David Leland is released on DVD and Blu-Ray by Network on 4th July 2011. These four television films brought the emerging writing talent of former actor David Leland to national attention. He would subsequently win a BAFTA Award for his writing and directorial debut Wish You Were Here and an Emmy Award for directing Bastogne in the Band of Brothers series.

Featuring early roles for Tim Roth and Jim Broadbent, the films form a scathing portrait of British society in the early 1980s, focusing in particular on the polarisation of attitudes towards the role and methods of education in an increasingly fragmented society. Without overtly offering solutions, Leland's films depict - often with unnerving acuity and foresight - the experience of individuals within systems that have become inadequate in dealing with the fallout of social breakdown. Of the four films presented here, Made in Britain, directed by the celebrated Alan Clarke, inevitably aroused the strongest controversy, with Tim Roth's astonishing portrayal of a nihilistic, racist teenage skinhead captured by Chris Menges' innovative cinematography.

Contentious, truthful and oftentimes harrowing, this hard-hitting quartet of films won both the Prix Italia and Prix Futura, fully justifying its controversial stance and determination to break new ground in television drama.

HotUHD
After moving to a new town, two brothers discover that the area is a haven for vampires as the classic The Lost Boys is released on 4K UHD 20th September 2022 from Warner Home Video. END_OF_DOCUMENT_TOKEN_TO_BE_REPLACED
Top PicksView