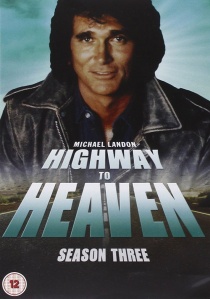 Jonathan Smith (Michael Landon) and his sidekick Mark Gordon (Victor French) continue to help those in need in the third season of classic drama series Highway To Heaven, released on DVD on 11th February 2013 courtesy of Revelation Films.

In this season, Jonathan and Mark are faced with more pain and adversity as they struggle to turn tragic situations into happy endings. From helping a disabled child to compete in the Special Olympics to supporting another angel on a failing assignment, the pair have their jobs cut out for them.