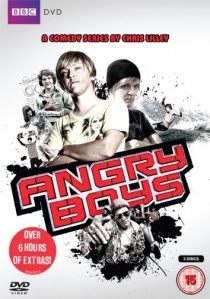 Chris Lilley, the creator and star of Summer Heights High, ramps up his acutely observed character-based comedy in the highly acclaimed mockumentary series Angry Boys. Released on DVD 15th August 2011 from 2entertain, this outrageous release contains all 12 episodes and an additional 6 hours of outstanding extras.

Starring Chris Lilley in a number of hilarious guises, Angry Boys tells a tale of teenage life in Australia via several unforgettable, often offensive and politically incorrect characters who somehow still manage to convey their warmth and humanity.

The mockumentary sees the welcome return of We Can Be Heroes identical twins Daniel and Nathan Sims. Life in the small town of Dunt, Australia, is all that Daniel and his 90-per-cent-deaf brother Nathan know. The boys live on a small farm with their mother, two younger brothers, a sister and now their mother's new boyfriend, Steve. They dam surf, they skate, they do "mainees" in the street in their mother's hotted-up Nissan Pulsar. In their bedroom is the "Wall of Legends", pictures of the people they consider their heroes - surfer Blake Oakfield, Japanese skater Tim Okazaki, US rapper S.mouse, bikini model Emily Chase, their late Dad and their prison officer grandmother, "Gran".

Gran lives and works at Garingal Juvenile Justice Centre for boys, together with her co-worker Penny. In her spare time, Gran cares for her 23 guinea pigs and makes superhero pyjamas for the young inmates.

S.mouse describes himself as "a legend in hip hop, the king of hip hop and the voice of my generation". He released the biggest selling hip-hop single of all time, but although the kid-friendly song was a huge success, S.mouse craves the recognition of his edgier peers.

Blake, 38, is a former Surfing World Champion from the New South Wales coastal town of Narmucca Bay. He has competing responsibilities - a pregnant wife with two children and a lifelong dedication to the surf gang he founded as a young man.

Finally we meet Jen, a softly spoken Japanese wife and mother of three, hiding an ambitious and tyrannical persona. Her primary focus is her son Tim, who she trained and pushed into becoming a gay skateboarding champion as part of her 'Gaystyle Enterprises'.

This must have comedy DVD features an amazing 6 hours of special material including extra-long bloopers, trailers and S:Mouse music videos.