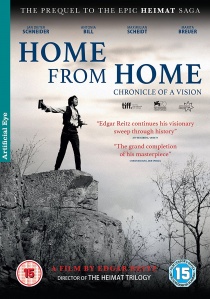 Home from Home, a chronicle of a vision is out on double disc DVD & Blu-ray on 15th June 2015 courtesy of Artificial Eye.

Edgar Reitz (director of the Heimat Trilogy) continues his visionary journey through German history with a domestic drama and love story set against the backdrop of a forgotten tragedy. In the mid 19th century, hundreds of thousands of Europeans emigrated to faraway South America. It was a desperate bid to escape the famine, poverty and despotism that ruled at home.

Jakob, the younger of two brothers, dreams about leaving his small village for adventures in the wild Brazilian jungle. Everyone who encounters Jakob is drawn into the maelstrom of his dreams: his parents, his belligerent brother Gustav, and above all, Henriette, the daughter of a gem cutter fallen on hard times. His brother's imminent return from military service, however, is destined to shatter Jakob's world and his love for Henriette.