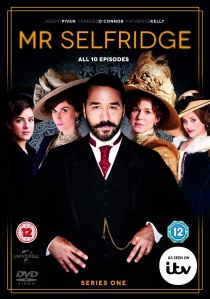 Ladies and Gentleman, welcome to the most spectacular show on earth. Discover the birth of a one man brand - the business mogul behind department store giant Selfridges - as he prepares to redefine the limits of luxury consumerism forever. The world waits with baited breath as its iconic doors open to proudly display Mr Selfridge - Series One on shelves from 11th March 2013, courtesy of Universal Pictures (UK).

It's London, its 1909 and the most important address in fashion's little black book is but a dust-covered dream strewn on a construction site at "the dead end of Oxford street". The most decadent shopping emporium in the city's history exists only as a fanciful and implausible idea buried within the mind of an ambitious and erratic young man.

Based upon the book Shopping, Seduction and Mr Selfridge by Lindy Woodhead, Mr Selfridge was created by Emmy® and BAFTA award-winning writer Andrew Davies (Bridget Jones, Pride and Prejudice) and written by Andrew Davies, Kate Brooke and Kate O'Riordan. Davies and his writing team have cherry-picked the most intriguing aspects of Harry's real, rags-to- riches life and used them as a spring-board to create all the razzmatazz of this glamorous big city story.

Mr Selfridge tells the story of 'Mile a Minute Harry'. Pioneering and reckless, with an almost maniacal energy, he created a theatre of retail where any topic or trend that was new, exciting, entertaining - or sometimes just eccentric - was showcased. Displaying only the finest merchandise London has to offer, Harry Selfridge wanted to indulge, empower and celebrate the modernised, free-spirited women of his time and so opened the doors of his lavish department store on London's famous Oxford Street in a mission to make the shopping experience as thrilling as sex.

Indulge in some retail therapy and grab yourself the ultimate accessory this year as the impeccable Mr Selfridge - Series One comes to DVD and Blu-Ray on 11th March 2013, courtesy of Universal Pictures (UK).

UHD
A 13-year-old girl named Meilin turns into a giant red panda whenever she gets too excited in Disney and Pixar's 25th feature film Turning Red, released on DVD, Blu-ray and 4K UHD 2nd May 2022 from Walt Disney Home ... END_OF_DOCUMENT_TOKEN_TO_BE_REPLACED
Top PicksView