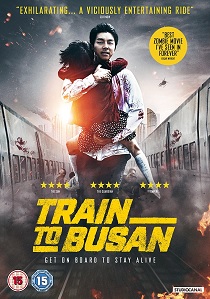 NewsHorrorDramaThriller
News Article Go back to homepage
Hailed as one of the best zombie film ever made, a father and daughter fight for their lives on a train full of the undead in the sensational blockbuster Train To Busan, released on DVD and Blu-ray on 27th February 2017 from StudioCanal.
Yoo Gong, Soo-an Kim, Yu-mi Jeong, Dong-seok Ma, Woo-sik Choi
Yeon Sang-ho
Dong-ha Lee
StudioCanal
1 hour 58 minutes
27/02/2017
#TrainToBusan
As an Amazon Associate we earn from qualifying purchases.
Buy DVD
Buy BD
Information

Hailed as one of the best zombie film ever made, a father and daughter fight for their lives on a train full of the undead in the sensational blockbuster Train To Busan - a truly astounding, action-packed thrill-ride from South Korea, with social bite, an unexpected emotional punch, and a carriage-load of first class action.

A mysterious viral outbreak pushes Korea into a state of emergency. The government declares martial law just as divorced Seok-woo and his daughter catch the KTX bullet train from Seoul to Busan to see her mother. But someone on the journey has been recently infected sending the hurtling carriages into complete chaos. As the living dead transform the voyage into a nightmare excursion, father and daughter and a small group of uninfected passengers must fight for survival. Get on board to stay alive!

Train To Busan, released on DVD and Blu-ray on 27th February 2017 from StudioCanal, has broken box office records across Asia and enjoyed fantastic critical acclaim since premiering at Cannes Film Festival's Midnight Screening. It closed London's Horror Channel FrightFest, with many declaring it the best film of the festival. And no less an authority than Kick-Ass, X-Men and Kingsman scripter Jane Goldman suggests it is a "genre-defining masterpiece".

With the maddest zombies ever seen onscreen and the heart-stopping ending that comes out of nowhere, Train To Busan is a "viciously entertaining ride" (SciFiNow) that will dazzle the most seen-it-all film fan. If you didn't catch it at the cinema, now's your chance to jump onboard this horror express!