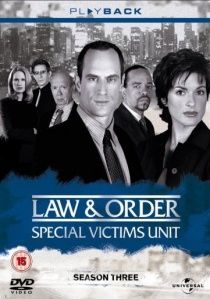 Join the incredible cast in the multiple Emmy® Award nominated Law and Order Special Victims Unit : Season 3 - available to own on DVD from 23rd July 2007, courtesy of Universal Playback.

The riveting show - a spin off of the established Law and Order series - delves into the dark side of the New York underworld as the detectives of an elite NYPD squad, the Special Victims Unit, investigate and prosecute various sexually related crimes whilst trying to balance the effects of the investigation on their own lives. The crimes they deal with are painful, emotional and disturbing, whilst each show is packed with powerful storylines and provocative plot twists.

In this 6 disc boxset, the established cast members of Ice-T, Christopher Meloni, Stephanie March and Richard Belzer are joined by Mariska Hargitay as Detective Olivia Benson, devoted to putting away rape offenders on a regular basis - tough as nails on the outside but secretly falling apart on the inside. Guest stars in this series include Eric Stolz, John Ritter, Henry Winkler, Bobby Canavale and Martha Plimpton in the role that earned her an Emmy® Award nomination for Outstanding Guest Actress.

Law and Order Special Victims Unit : Season 3 delivers the quality that viewers have come to expect from this intelligent, hard-hitting franchise.

3D-BD
Following the global success of Godzilla and Kong: Skull Island comes the next chapter in the cinematic Monsterverse in Godzilla II: King of the Monsters, arriving on DVD, Blu-ray and 4K UHD 7th ... END_OF_DOCUMENT_TOKEN_TO_BE_REPLACED
Hot PicksView