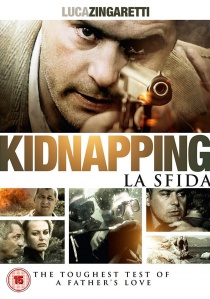 Charismatic Italian star Luca Zingaretti forsakes his familiar crime-fighting role as TV's Inspector Montalbano to play a character most definitely on the wrong side of the law in Kidnapping: La Sfida (The Challenge). This emotionally charged thriller about kidnapping, guilt, redemption and the power of family ties comes to DVD on 22nd June 2015, courtesy of Odyssey.

Heinz Hoenig (Das Boot) stars as Max Klausner, a wealthy workaholic German industrialist, whose young son Tommy is kidnapped while on holiday in Sardinia. The kidnapping is just one of the torments besetting Max; he begins to suspect the kidnappers identities and also faces blackmail from his shady business partner. As realisation sets in Max faces the toughest test of a father's love; he must save his son.

Refusing to pay the ransom, the police are shocked as Max returns to Berlin but he has his own agenda. He hires former secret service agent Werner Shröder (Michael Degen - Hannah Arendt), who discovers that Tommy's kidnapper, the Sardinian Tonino Sanna (Zingaretti), and his henchman are holding the boy in a remote Tuscan hideout. Max's ruthless business instincts pinpoint the leverage required to put intolerable pressure on Tonino and secure Tommy's release. This audacious move, however, will have an outcome that impacts on Max's emotional life in a way he'd never expected

He'll get his son back... whatever it takes in Kidnapping: La Sfida.

DVD
Doctor Strange teams up with a mysterious teenage girl from his dreams who can travel across multiverses in Doctor Strange in the Multiverse of Madness, released on DVD, Blu-ray and 4K UHD 18th July 2022 from ... END_OF_DOCUMENT_TOKEN_TO_BE_REPLACED
Top PicksView