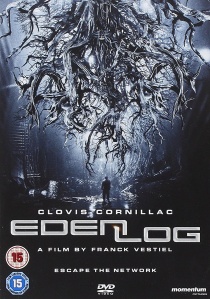 From Cédric Jimenez, producer of Scorpion, the dazzling debut feature by co-writer and director Franck Vestiel (whose previous credits as an Assistant Director include Dante 01, Them, The Nest, The Red Siren and Brian De Palma's Femme Fatale), Eden Log, released on DVD by Momentum Pictures on 28th July 2008, is a stylish and thought-provoking sci-fi shocker that recalls the brilliance of the early works of acclaimed directors such as George Lucas (TXH 1138), Luc Besson (The Last Battle), Andrei Tarkovsky (Solaris; Stalker), Vincenzo Natali (Cube) and Darren Aronofsky (Pi).

Co-written by Pierre Bordage (Dante 01) and starring Clovis Cornillac (Asterix At The Olympic Games; Scorpion; A Very Long Engagment), Vimala Pons (President; Locked Out), Arben Bajraktaraj (Taken, Harry Potter And The Order of the Phoenix), Tony Amoni (The Ninth Gate) and Gabriella Wright (The Tudors), the film is an awe-inspiring creation of flair and ingenuity that is all too rare in genre cinema today. Tolbiac (Cornillac) wakes up naked, disorientated and lost in a dark cave deep below ground. He's cold, hurt, and has no idea what brought him there, or what happened to the dead man lying next to him.

Surrounded by the ruins of an underground world and with only the faintest light source to guide him, Tolbiac attempts to recover his lost memory as he struggles to reach the surface. His journey takes him through a labyrinthine network of tunnels and abandoned laboratories, where he discovers he is not the only one trapped in this tomb-like underworld. Pursued by ravenous mutants and evil phantoms, he eventually meets a woman who may provide the clue to his identity, while all along the way he is confronted by evidence of a mysterious organisation known as Eden Log.

Undoubtedly destined for cult status among fans of intelligent and challenging sci-fi and fantasy, Eden Log is a truly unique example of the genre, full of action and featuring impressively slick visuals and amazing sound design, both of which add to the film's foreboding sense of mood and atmosphere. A remarkable feature debut, it definitely marks Franck Vestiel as a director to watch in future.

HotDVDBDUHD
Released on DVD, Blu-ray and 4K UHD 16th September 2019 from Lionsgate Home Entertainment, super-assassin John Wick is back and on the run after killing a member of the international assassin's guild, and with a $14 million price tag on his head - he is the target of hit men ... END_OF_DOCUMENT_TOKEN_TO_BE_REPLACED
Top PicksView