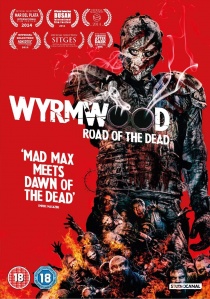 The blistering feature debut from the brother writing team of Kiah and Tristan Roache-Turner, Australian zombie horror Wyrmwood: Road Of The Dead is released on DVD and Blu-ray by StudioCanal on the 11th May 2015.

With its tongue wedged firmly in cheek and a dark Aussie sensibility, Wyrmwood has reinvigorated the zombie flick. All while keeping what makes the genre so popular - gore, scares, and flesh-hungry monsters. Imagine an Aussie Shaun of the Dead, with the extreme turned all the way up to 11.

Wyrmwood is also a triumph of DIY horror, held together by glue, gaffer tape and a pure love of gore. Produced over four years - and exceeding the brothers' original budget by $130,000 - the props and costumes were made by Tristan and his friends, while the crew doubled up as zombies.

Wyrmwood also drew on social media for much more than just promotion and funding. "We not only built an online fan base but were able to source locations, digital artists, poster designers, key cast and crew, a cracking composer, make-up artists and, most importantly, zombies!" says director Kiah. "Fans not only follow the development of a film these days but can get involved! We were able to post a request for a 'para-military-looking four wheeldrive' for a scene in the film and have someone message us within hours with just that very prop truck! Anytime we wanted we could post that we needed zombies for a particular day and we would be flooded with responses - we had to turn heaps of people down!"

Following a meteor shower a vast number of the population turn into flesh-eating zombies. When his wife and daughter succumb to the apocalypse, mechanic Barry (Jay Gallagher), a talented mechanic and family man, makes his way across the outback to rescue his sister Brooke (Bianca Bradey), though he is unaware she has been kidnapped by an experimental scientist known as The Doc (Berryn Schwerdt).

Along the way Barry meets fellow survivor Benny (Leon Burchill) and the two team up as they battle their way through hordes of zombies in a harsh Australian bushland. 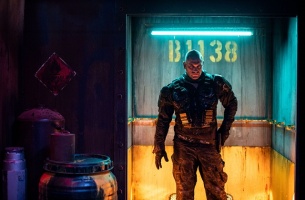 HotDVDBD
Having thrilled UK audiences - and sated horror fans' thirst for bloody-bedlam on its UK premiere at FrightFest Glasgow, now Wyrmwood: Apocalypse is set for its Blu-ray, DVD and digital release on 16 May 2022 from 101 Films. END_OF_DOCUMENT_TOKEN_TO_BE_REPLACED
Comments
BD Releases News Pick