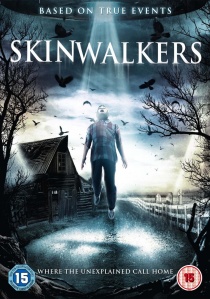 Where the unexplained call home. Based on true events, Skinwalkers is released on DVD and Blu-ray on 24th February 2014 courtesy of Signature Entertainment.

A scientific research team investigates and documents the supernatural phenomena surrounding the disappearance of eight year old Cody, who vanished in to thin air right before his parents eyes on their Utah ranch. When the group arrive almost a year later, the inexplainable incidents begin to escalate.

From otherworldly lights, shadowy figures and even cattle mutilation, the team must decide how far they should go to unlock the mysteries of Skinwalker Ranch and whether the answers are worth risking their lives for.

UHD
Say the 'B' word three times and have a wonderful Day-O as Tim Burton's Beetlejuice arrives for the first time on 4K UHD 31st August 2020 from Warner Home Video. END_OF_DOCUMENT_TOKEN_TO_BE_REPLACED
Hot PicksView