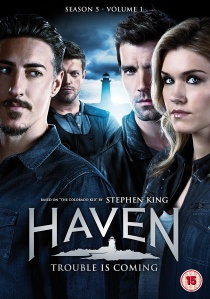 NewsTV SeriesThrillerCrime
News Article Go back to homepage
Based on legendary writer Stephen King's The Colorado Kid, the first volume of episodes from the fifth season of the drama Haven arrives on DVD for the first time on 12th October 2015.
Emily Rose, Lucas Bryant, Eric Balfour, Richard Donat
Entertainment One
8 hours 53 minutes
12/10/2015
#HavenSeason5
Thank you for supporting DVD365.net when you order using the link(s) below. As an Amazon Associate we earn from qualifying purchases
Buy DVD
Information

All is not what is seems in Haven, Maine. FBI Agent Audrey Parker (Emily Rose - ER, Graceland), originally came to the small town to solve the mysterious murder of an ex-con, but soon discovered strange supernatural happenings were afoot. Haven Series Five Volume One - the most thrilling series yet - comes to DVD courtesy of Entertainment One on 12th October 2015.

Based on legendary writer Stephen King's The Colorado Kid, the residents of Haven are cursed with superhuman afflictions know as 'The Troubles'. Audrey Parker and her friends must help the sufferers, as they delve into deeper mysteries.

Season Five Volume One picks up with the aftermath of our heroes' victory over Haven's ultimate villain William. After having successfully banished him into the Void, Nathan (Lucas Bryant - Sex, Love & Secrets, Beauty and the Beast) and Duke (Eric Balfour - 24, Six Feet Under) are devastated to discover that the Audrey Parker they know and love has disappeared. In her place stands Mara, the unflinchingly malevolent "original" person responsible for creating the troubles many centuries ago. Finally freed from the confines of her do-gooder husks, Mara proceeds to unleash a wave of chaos over Haven, taking things to a whole new level.

Haven Season Five Volume One airs on Syfy and arrives on UK DVD for the first time on 12th October 2015, complete with a slew of fantastic extras.