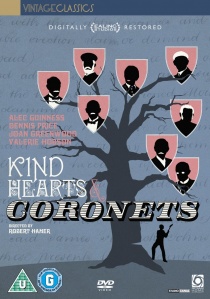 Digitally restored and released on DVD and Blu-ray on 5th September 2011 from Optimum Home Entertainment, perhaps the most perfect of all the Golden-Age Ealing comedies, which is also included on the British Film Institute's list of the 100 Best British Films of the 20th Century, Kind Hearts and Coronets famously featured Alec Guinness in eight different roles as the unsuspecting members of the aristocratic D'Ascoyne family - bumped off one by one by the scheming, outcast cousin of the family: Louis Mazzini.

Mazzini's mother was a D'Ascoyne by birth, but she ran away with an opera singer and was ostracized by her family as a result. When her dying wish to be buried in the family crypt is refused, Louis vows to get his revenge. As he ascends the social ranks, he is torn between his love for now-married childhood sweetheart and equally devilish Sibella (Joan Greenwood) and the saintly wife of one of his victims, Edith D'Ascoyne (Valerie Hobson).

Dennis Price's stunning performance as the ambitious Louis has always been somewhat overshadowed by Guinness, so sit back and admire anew the coolly detached relish with which he dispatches the eight relatives standing between himself, the Dukedom and revenge. The film featured stunning and inventive cinematography by Douglas Slocombe and a groundbreaking first-person narrative that, legend has it, inspired Scorsese to make use of the same device in Goodfellas.

2010 saw the return to UK cinema screens of three iconic titles, following extensive digital restoration: The Railway Children, Breathless and Peeping Tom. They have also committed to restoring the following classics from the UK catalogue for potential cinema and blu-ray release in 2011: Don't Look Now, The Man Who Fell to Earth, Ice Cold in Alex, The Cruel Sea, Whiskey Galore!, The Lavender Hill Mob, Quatermass & The Pit and Kind Hearts & Coronets. These releases herald an increased commitment from Optimum to preserving and restoring the vast library of classic titles that they manage on behalf of Studio Canal at a new state-of-the-art cold storage facility at Pinewood studios.

Kind Hearts and Coronets was scanned in 2K definition on a Northlight 2 Film Scanner from the original 35mm negative elements and restored in High Definition. The picture was restored using Film Master D.V.O restoration tools and PFClean software systems, removing dirt, scratches, warps, torn or replacing torn or missing frames and improving stability issues. The sound was also improved, with instances of pops, clicks, hiss and distortion minimised or removed.

HotUHD
Now more stunning than ever before, return to the stunning locations and epic adventures in Peter Jackson's Middle-earth in The Lord of the Rings Trilogy, arriving on stunning 4K UHD 30th November 2020 from Warner Home Video. END_OF_DOCUMENT_TOKEN_TO_BE_REPLACED
Top PicksView