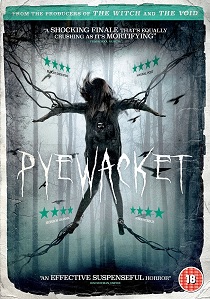 NewsHorrorThriller
News Article Go back to homepage
From the producers of modern horror classics The Witch and The Void, a teenage girl regrets performing a ritual to summon a witch in Pyewacket, the supernatural chiller Pyewacket, released on DVD 23rd April 2018 from Signature Entertainment.
Laurie Holden, Nicole Munoz, Chloe Rose, James McGowan
Adam MacDonald
Jonathan Bronfman
Signature Entertainment
1 hour 30 minutes
23/04/2018
#Pyewacket
Thank you for supporting DVD365.net when you order using the link(s) below. As an Amazon Associate we earn from qualifying purchases
Buy DVD
Information

From the producers of modern horror classics The Witch and The Void, a teenage girl regrets performing a ritual to summon a witch in Pyewacket, the supernatural chiller Pyewacket, released on DVD 23rd April 2018 from Signature Entertainment.

After her father dies, teenager Leah is forced, by her unstable mother, to leave her friends behind and move to a house in the woods. Feeling isolated and hopeless, Leah turns to Black Magic to release her anger. She naively performs an occult ritual found in a book on her bedroom shelf to invoke the spirit of a witch to kill her mother. Terrified by strange occurrences, and stricken by guilt, Leah desperately tries to reverse the spell, but soon realises she has awoken something in the woods... and nothing can prepare her for the terror that has been unleashed.

Adam MacDonald, who directed the impressive killer bear thriller Backcountry, has crafted a deliciously taut slow burner, with outstanding central performances from Nicole Munoz (Once Upon A Time, Hemlock Grove) as witchcraft-obsessed teenager Leah, and The Walking Dead's Laurie Holden as her mother. As surprising as it is inventive, the film plants a seed of dread from the moment teenager Leah performs an occult ritual in the woods, building to an excruciating climax that will do for the woods what Jaws did for the water. Although there are nods to other genre favourites - thumps in the attic recall The Exorcist, the house in the woods The Evil Dead - Pyewacket is its own bone-chilling beast.

With an ominous, brooding score (by Bring Me The Horizon's Lee Malia), Pyewacket is an unnerving, original terror experience that will delight fear fans in search of a genuine creep out. Take a deep breath and prepare for your nerves to be shattered...