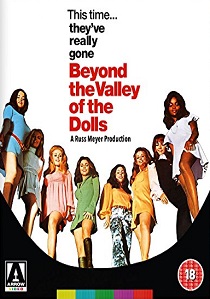 NewsComedy
News Article Go back to homepage
Co-scripted by film critic Roger Ebert, Beyond the Valley of the Dolls, released on dual-format DVD and Blu-ray on 18th January 2016 courtesy of Arrow Films, is a merciless satire of Hollywood and the music business in one of the most riotously unhinged mainstream films ever made.
Dolly Read, Cynthia Meyers, Marcia McBroom, Erica Gavin, Marianne McAndrew, Philip Carey
Russ Meyer
Russ Meyer
Arrow Video
1 hour 44 minutes
18/01/2016
#BeyondTheValleyOfTheDolls
Thank you for supporting DVD365.net when you order using the link(s) below. As an Amazon Associate we earn from qualifying purchases
Buy DVD
Buy BD
Information

When Easy Rider rewrote the box-office rulebook in 1969, Hollywood scrambled to catch up - and 20th Century Fox noticed that one particular independent filmmaker was seeing impressive returns from tiny investments. So what would happen if he was given a decent budget and the run of a Hollywood studio and told to make the ultimate Russ Meyer film?

Well, this is the result: an initially X-rated cult camp classic about an all-female rock band trying to parlay Midwestern success into a Hollywood contract with the aid of a hefty inheritance. But will they be able to maintain their trademark apple-pie wholesomeness under their new manager, the notorious Ronnie 'Z-Man' Barzell? Take a wild guess.

Co-scripted by film critic Roger Ebert, Beyond the Valley of the Dolls, released on dual-format DVD and Blu-ray on 18th January 2016 courtesy of Arrow Films, is a merciless satire of Hollywood and the music business, a no-holds-barred psychedelic thrill-ride that gleefully stirs sex, drugs, rock'n'roll, fashion, lesbianism, transvestism and Nazis into one of the most riotously unhinged mainstream films ever made.

BD
In The Black Phone, released on DVD and Blu-ray 3rd October 2022 from Warner Home Video, a teenage boy is abducted by a sadistic killer and discovers a phone in his basement cell that allows him to communicate with the killer ... END_OF_DOCUMENT_TOKEN_TO_BE_REPLACED
Top PicksView