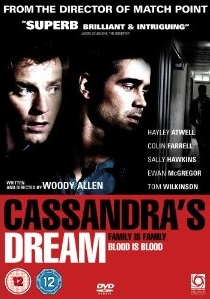 Written and Directed by Woody Allen and starring Ewan McGregor, Colin Farrell, Tom Wilkinson and Hayley Atwell, Cassandra's Dream is due to be released on DVD by Optimum Home Entertainment from 29th September 2008.

Set in contemporary London, Cassandra's Dream is a powerful and thrilling story about two brothers who are desperate to better their troubled lives. One is a chronic gambler in debt over his head, and the other is a young man in love with a beautiful actress (newcomer Hayley Atwell, soon to be seen in Brideshead Revisited) he has recently met. Their lives gradually become entangled into a sinister situation with intense and unfortunate results.

Related Articles
Epic, Roman J. Israel, Esq., The Killing Of A Sacred Deer, The Beguiled, Fantastic Beasts and Where to Find Them, The Lobster, True Detective: Season 2, Dead Man Down, Seven Psychopaths, Total Recall, Fright Night, Tigerland, The Way Back, London Boulevard, Pride and Glory, Widows, Dumbo, In Bruges, The Gentlemen
Our Kind of Traitor, Jane Got A Gun, The Ghost, Fargo: Season 3, American Pastoral, Jane Got A Gun, Our Kind Of Traitor, Miles Ahead, Mortdecai, August: Osage County, The Impossible, Salmon Fishing In The Yemen, Fastest, Perfect Sense, Winnie the Pooh, The Ghost, The Men Who Stare At Goats, Angels and Demons, Incendiary, Shallow Grave: Special Edition, Deception, Down With Love, Moulin Rouge, Star Wars : Episode II - Attack of the Clones, Star Wars: Episode I - The Phantom Menace, Christopher Robin, Black Hawk Down, Doctor Sleep, Beauty and the Beast, Birds of Prey: And the Fantabulous Emancipation of One Harley Quinn
Café Society, Interiors, Irrational Man, Scoop, Magic in the Moonlight, Blue Jasmine, To Rome With Love, Midnight In Paris, You Will Meet a Tall Dark Stranger, Whatever Works, Wonder Wheel, A Rainy Day in New York
Secret Diary of a Call Girl
Comments
3D-BD Releases News Pick