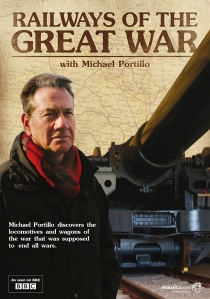 Railways of the Great War with Michael Portillo (2014)

NewsTV SeriesSpecial Interest
News Article Go back to homepage
Marking the centenary of the First World War, Michael Portillo is back in this new BBC Two TV series Railways of the Great War with Michael Portillo, released on DVD by FremantleMedia on 11th August 2014.
Michael Portillo
FremantleMedia
2 hours 30 minutes
11/08/2014
#GreatWarRailways
Thank you for supporting DVD365.net when you order using the link(s) below. As an Amazon Associate we earn from qualifying purchases
Buy DVD
Information

Michael Portillo is back, taking to the tracks in this new BBC Two documentary TV series to mark the centenary of the First World War. "Railways of the Great War with Michael Portillo" will be broadcast from 4th August 2014 and will be released on DVD by FremantleMedia International on 11th August 2014.

In this five part series Michael Portillo discovers the central role the railways played in securing victory, repatriating the dead and wounded, and feeding the insatiable appetite for weaponry and supplies that the theatre of war demanded. This is a story of how a British invention that brought trade, travel and prosperity in peacetime became an engine of war.

Michael will track down the fascinating, emotional and sometimes tragic stories of the wartime railways that criss-crossed Britain and Europe. The railways were then widely considered the new arm in modern warfare as it was a time where motorised transport and roads were in their infancy.

Over the five episodes Michael will travel to the key railway locations across Belgium, Luxembourg, France and Britain that would become synonymous with the victories, defeats, battles and campaigns of the First World War, showing how they were intrinsic to our success and how they resulted in the Europe we know today.

HotDVDBDDIGITAL
With stunning revelations, glamorous journeys, and the arrival of the Jazz Age, Downton Abbey: A New Era, released on DVD and Blu-ray 15th August 2022 from Warner Home Video, will be the Crawleys' biggest adventure yet as they grapple with their future and new intrigue about ... END_OF_DOCUMENT_TOKEN_TO_BE_REPLACED
Top PicksView