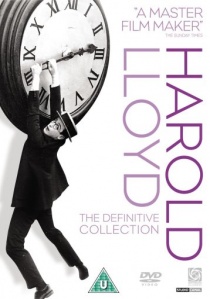 News
News Article Go back to homepage
Harold Lloyd was one of the great comic stars of the cinema, a genius on a par with Chaplin and Keaton. For the first time ever on DVD, Optimum Classics is releasing the fully restored and digitally re-mastered Harold Lloyd Collection, out to own on DVD from 9th July 2007.
Optimum Classics
29 hours 6 minutes
09/07/2007
As an Amazon Associate we earn from qualifying purchases.
Buy DVD
Information

Harold Lloyd was one of the great comic stars of the cinema, a genius on a par with Chaplin and Keaton. For the first time ever on DVD, Optimum Classic is releasing the fully restored and digitally re-mastered Harold Lloyd Collection, out to own on DVD from 9th July 2007.

Born in Burchard, Nebraska, on April 20, 1893 Lloyd was acting at an early age with theatrical repertory companies. He made his film debut as an extra in a 1913 one-reel film for the Edison Film Company. He became friends with another extra, Hal Roach, and when Roach formed his own film company, he invited Lloyd to join him. Lloyd's initial comic characterisation was a tramp character called Willie Work.

After a series of partings over money and subsequent reconciliations, Roach and Lloyd created a new character, called Lonesome Luke, which became popular, despite Lloyd's dislike of imitating Charlie Chaplin, which the film distributor, Pathé, demanded. Then Lloyd found the idea that was to become his trademark, and change him from a good comedian to a major star: the glasses. Lloyd persuaded Roach and his distributor to abandon Lonesome Luke and in 1917 Lloyd shed grotesque comedy clothes and characterizations for a pair of horn-rimmed glasses. In doing so, Lloyd created an American archetype, an optimistic and determined go-getter sporting spectacles and a toothy smile.

Lloyd retained the "Glass Character" (as Lloyd called his comic persona) throughout the rest of his motion picture career, which spanned 34 years and over 200 comedies. Among his most famous films are Grandma's Boy (1922), Safety Last! (1923), The Freshman (1925), The Kid Brother (1927), Speedy (1928), and Movie Crazy (1932), all included here amongst many other gems in this most comprehensive of collections.