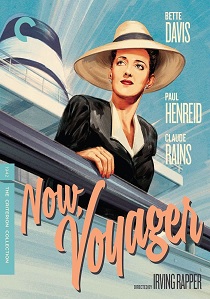 Nervous spinster Charlotte Vale (Bette Davis; All About Eve) is stunted from growing up under the heel of her puritanical Boston Brahmin mother (Gladys Cooper; My Fair Lady), and remains convinced of her own unworthiness until a kindly psychiatrist (Claude Rains; Notorious) gives her the confidence to venture out into the world on a South American cruise.

Onboard, she finds her footing with the help of an unhappily married man (Paul Henreid; Casablanca). Their thwarted love affair may help Charlotte break free of her mother's grip-but will she find fulfilment as well as independence?

Made at the height of Davis's reign as the queen of the women's picture and bolstered by an Oscar-winning score by Max Steiner (Gone with the Wind), Now, Voyager is a melodrama for the ages, both a rapturous Hollywood romance and a poignant saga of self-discovery.