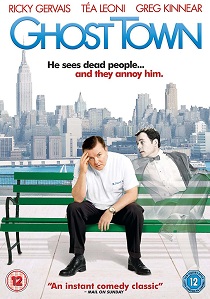 The Emmy award winner and seven times Bafta winner Gervais proves his Hollywood worth in this transatlantic feel good love story about a man, a woman and a ghost. Pincus is a New York City dentist with horrendous people skills. When a routine surgery goes awry, Pincus is pronounced dead, but is miraculously revived seven minutes later. The ill-mannered Manhattanite suffers only one lasting after-effect; the ability to see and speak with the dead. Word soon gets out in the spirit community and Pincus is irritated to discover he's the go-to-guy for every phantom with unfinished business in the city.

At the forefront of the ghostly mob is recently deceased Frank Herlihy (Greg Kinnear - Little Miss Sunshine, Baby Mama), who is determined to stop the remarriage of his widow, Gwen (Téa Leoni - Spanglish, Fun with Dick and Jane). The laughs unfold when the prickly and romantically inexperienced Pincus, smitten with Gwen, tries to woo her away from her betrothed - with hysterically awkward results.

With sharp performances and beautifully dry Gervais execution, Ghost Town won't fail to make viewers laugh out loud. With a host of special features including commentary from renowned director David Koepp and making Ghost Town', this is one DVD that should be in the collection of every Ricky Gervais fan.

Related Articles
Brigsby Bear, Heaven is for Real, Stuck In Love, I Don't Know How She Does It, The Kennedys, Feast of Love, Unknown, Fast Food Nation, The Gift, Mystery Men, House of Cards: Season 6, Mystery Men
Sleeping With Other People
Mortdecai, Premium Rush, You Should Have Left
Comments
Hot Pick

HotDVDBD
From the producers of Nobody and John Wick comes a bare-knuckle, coal-dark holiday action-comedy that says you should always bet on red as Violent Night sledges in on DVD and Blu-ray 6th March 2023 from Warner Home Video. END_OF_DOCUMENT_TOKEN_TO_BE_REPLACED
Top PicksView