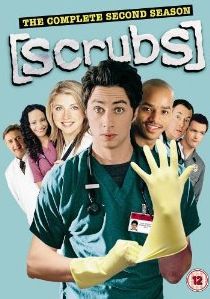 As I stated in my review of Scrubs: Season 1, Scrubs is one of a new generation of American sitcoms that, whilst unfortunately not lighting up the ratings as much as shows like Seinfeld or Friends have in the past, build up a large, loyal and dedicated fan base and Internet following. It's not difficult to see why; shows such as Scrubs do not easily fit into the sitcom mould.

Describing Scrubs as a sitcom doesn't do it justice; it's a comedy based on humour emerging from funny situations, sure, but it's also a drama, a stage show and a slapstick Jim Carrey-esque movie; often all in the same episode. It doesn't have a laugh track, is filmed on location, and utilises independent music to great effect. Its special effects are first-class and some of the gags feel like they belong in a cartoon. All of this adds up to one of the most innovative television shows TV has ever seen; whilst Malcolm In The Middle pioneered the laugh-track-free sitcom and Curb Your Enthusiasm led the trend towards on-location shooting, it was Scrubs that really first combined these elements into what can only be called a televisual masterpiece. It deserves all of the acclaim it gets.

Alongside these three we meet J.D.'s mentor, Dr. Perry Cox (John C. McGinley), as damaged a character one can possibly be and prone to lengthy humorous rants. He also always refers to J.D. by a girl's name, and does to his best to stay away from personal problems the younger residents get into, although this season he gets into his own when ex Jordan Sullivan (Christa Miller) arrives back on the scene for the long term with Cox's baby. There's also Dr. Bob Kelso (Ken Jenkins), grumpy old hospital manager; Carla Espinosa (Judy Reyes), Turk's Hispanic girlfriend; the Janitor (Neil Flynn), a strange character who has a compulsion to insult or scare J.D.; and Ted (Sam Lloyd), nervous hospital lawyer and lapdog of Kelso. There are also many other minor characters who serve mostly to serve a punch line or as foils, comic or otherwise, to the main characters.

Humour emerges from everywhere in Scrubs, be it from the characters foibles; the at-times outrageous storylines; the sharp, acid-tongued insults the characters frequently spout; or the random aside gags and visions that appear (mostly) in J.D.'s mind. There's a joke type for everyone here, and if like me you enjoy many kinds of humour, you're destined to find this show hilarious.

Drama, emotion, characterisation and plotline play a large part in the series, more than can be said for many other current sitcoms. The end of each episode often serves up a moral, and episodes frequently end on a particularly emotional note, be that positive or negative, something few other sitcoms could carry off with conviction. The show is filmed using a single camera, and action is always taking place - this is more E.R. or Curb Your Enthusiasm than Seinfeld or Friends.

Season two of Scrubs is often cited as the strongest season of the show, and I'd be inclined to agree. Whilst not having the clear standout episode of the season like season 1 "My Old Lady" or season 3 "My Screw Up", the humour is remarkably consistent throughout the 22 episodes. The gags continue to be quick fire, the lines are always delivered brilliantly, the storylines are at times wacky and at times truly emotionally moving.

This season's episodic morsels are even more eclectic than those in the preceding season; sure, each episode is wrapped up with something of a moral, but how these are approached varies greatly. This season features the brilliant "My Overkill", which kicks off with Colin Hay performing his "Overkill" song whilst stalking J.D. around the hospital (far more entertaining than it sounds); the revelation that Jordan is to be a mother - and Dr. Cox a father - in "My Fruit Cups"; J.D. and Elliot's second sexual encounter in "My Sex Buddy"; "His Story", in which Dr. Cox takes over J.D.'s narration for an episode; and the saga of the "T.C.W." (Tasty Coma Wife). Each episode features several sub-plots, so the shows never veer off into boring or clichéd territory, and gags come quick and fast; lightening the mood during dramatic scenes but never ruining the moment.

Video quality on this release is acceptable; in fact, it is thankfully slightly better than that of the mediocre season 1 set. Whilst not as sharp as you might hope for such a recent show, colours are fine and the NTSC-to-PAL conversion isn't as bad as it could have been. The grain has been toned down from season 1, but this still isn't winning any awards for video clarity. The show is presented in 1.33:1, as originally aired.

Audio is fine; the DD 2.0 track won't blow your mind but it's sufficient for dialogue-heavy sitcoms such as Scrubs. The sound effects and music used (such as the theme song) are rich and sharp and the track is as good as one would hope for a 2.0 track. Audio is available in English, French, Italian and German; no Spanish this time. Subtitles are available in ten European languages, including English for the hearing impaired, all of which except for the English are available on the extensive special features too (annoying they missed English out - bad news for the hearing impaired on that front!).

The menus are well-designed, look great and are easily navigable; they are fairly similarly designed to season 1. The opening theme plays in the background on the main screen; on other screens, the closing theme plays. Strangely, Buena Vista have not included the episode name on the menus, simply numbering them, which can be quite confusing, especially if you're unfamiliar with the episode. Thankfully, an insert with episode titles (though no descriptions, disappointingly) in included in the three-panel DigiPack the set is presented in; one pane holding the flyer, the remaining two holding two discs overlapping - a space saver, if slightly annoying and unwieldy.

Once again a wide array of bonus features have been packed into this set; and once again, aside from the commentaries, all are located on the final disc.

Six commentaries are present throughout the set, on My Overkill, My Case Study, My First Step, My Sex Buddy, His Story and My T.C.W. Series creator (and comedic genius) Bill Lawrence is present on all six, joined by cast members including Braff, Lloyd and McGinley. These are just as good as the commentaries on the first season set. They are interesting and entertaining in equal measures, much like those on The Simpsons and Futurama sets. The banter between the participants proves how funny these people can be; their wit on the spot is of a very high par. Also present on this set, as with last time, are Scrubbed Out : Deleted Scenes, a nine-minute montage of somewhat humorous deleted scenes from eight episodes; and a five minute Alternate Lines : A Second Opinion featuring fun, if somewhat ruder, alternate takes of some lines. There's also a great gag reel.

The remainder of the bonuses are an array of Featurettes. We have the longest of the lot, the 15-minute A Rare Condition, which looks at the second season as a whole and features many of the cast and crew commenting; a brilliant seven-minute featurette about the music on the show Musical Stylings; and a brilliant 5-minute interview/featurette about and with John C. McGinley and his character Dr. Cox. There are various other featurettes too, about the secrets behind the episodes, J.D.'s "mojo", the season two guest stars and the fantasy sequences.

Anyone who enjoys Scrubs will enjoy this set; the episodes are outstanding and the DVD package is commendable in terms of extra features. Despite a few minor qualms (video quality, no episode descriptions anywhere), this is still an excellent set, and you're getting twenty-two episodes of one of the best sitcoms around. For fans of Scrubs (and there are many) this is a no-brainer; for those new to the show, catch it on TV before taking a risk with an entire season.