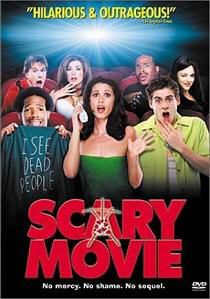 One evening, whilst out having fun in a car, a group of teenagers hit and accidentally kill a man. Not knowing what to do they dump the body in the sea. However, a year on, the teenagers are now being stalked by a blundering serial killer. Does all this sound familiar? Well, if you've seen the horror films Scream and I Know What You Did Last Summer then you'll be completely at home with the plot. By no coincidence, Dimension films was behind the successful Scream trilogy and ghost face has returned in a style you'd least expect!

This hilarious film is the new Airplane for the 21st century and it manages to send up many of the most popular horror, and non-horror, films of late. I managed to spot references to I Know What You Did Last Summer, Scream, Baywatch, The Blair Witch Project (which had me in stitches), Amistad, Shakespeare in Love, The Matrix, The Sixth Sense, Friday the 13th and even The Exorcist.

The picture is excellent, with a bright and colourful picture throughout the film. With many scenes taking place at night there are no signs of artifacting or outlining and it has a high bit-rate throughout. To be honest, the picture quality far exceeded my expectations. Considering that 'Scary Movie' was not a mainstream film - perhaps its box office success led to more effort being placed into the DVD.

Again, the sound is good, with the dialogue firmly fixed in the centre channel along with a reasonable amount of action in the rear channels. However, it was the soundtrack which really uses the surrounds to its full potential. This was especially evident during the 'Matrix' parody and the music during the closing credits which had various cast members chattering in the rear channels.

This is a real comedy classic and if you enjoy spoof films then you'll have no problem with this one. Unfortunately, sensing a cash cow which requires milking, the producers have decided to make a sequel. This seems to fly in the face of the films tagline - 'No Mercy. No Shame. No Sequel'. You can read the review of Scary Movie 2 here.

Interesting enough, this region one disc is also encoded as region four and thus gives the Australian DVD owner a head start of the rest of us. One word of warning though, this disc refused to play on my region free PC-DVD ROM, although I suspect a software error on the DVD as opposed to RCE.