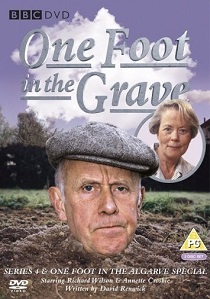 One Foot In The Grave: Series 4

People, in Victor Meldrew's view, were created to annoy him. And Victor annoys them too, provoking them to extremes with his incessant ramblings, perpetual bad luck, constant complaining and general bad (but usually fairly accurate) feelings against everything from the local baker to telephone help lines. Sharing his abject misery, nightmares and rank confusion are his long-suffering wife Margaret, her friend Mrs. Warboys, and the rather strange neighbour Mr. Swainey, his bedridden mother who you never see, along with their other neighbours Pippa and Patrick Trench.

In The Pit and the Pendulum, Victor decides that Patrick's tree is the reason for his back garden being dry so he enlists the services of a gardener to help remove the offending roots. However, the gardener is not as green fingered as Victor first thought and after the usual sets of arguments, Victor discovers another use for the recently excavated pit. In Descent into the Maelstrom, Margaret collapses from nervous exhaustion which has been building for the past 35 years (which is strangely the same number of years she's been married to Victor). But after a few days of being nursed by Victor she can take no more and decides to return back to work in order to get some peace, quiet and sanity. But when a young woman Margaret knew as a girl visits with a baby, Victor uncovers a disturbing truth about her.

In Hearts of Darkness, The Meldrews, Mrs. Warboys and wacky neighbour Mr. Swainey take a trip into the countryside. But as is norm for the Meldrews, nothing goes to plan and they all end up hopelessly lost in the woods. And just as things couldn't get any worse for Victor, whilst sheltering in the back of a builders van during a rain storm, he ends up being concreted to Mrs. Warboys. After freeing himself Victor decides to go for help and in doing so he stumbles upon an old people's home where the residents are being abused by the cruel staff. Victor decides to act in the only way he knows best. In Warm Champagne, the pair have just returned from a holiday abroad. As usual, nothing went right and Victor is suffering from painfully sunburnt feet. With Margaret becoming more annoyed than usual at his incessant grumbling she decides to meet up with Ben, the charming man she met on holiday. However, after turning down the possibility of an affair, she is just as surprised as Victor to find another woman in her bed when she returns home.

In The Trial, a restless Victor spends the day at home on his own whilst on call for jury service. Unable to leave the house, he looks up his various ailments in a medical dictionary (deciding that they're all terminal), receives a letter from a disgruntled Jehovah's Witness, struggles to avoid listening to a lengthy description of Mrs Warboys holiday in Cork, half writes a letter to a relation and tackles a difficult crossword with a leaking blue biro. Finally, in Secret of the Seven Sorcerers, in order to prove that they are a normal couple, Margaret invites Patrick and Pippa round for a friendly meal. Never the less, Patrick is distinctly uncomfy about what horrors are awaiting them. Meanwhile, Victor now has finally managed to get a new job as a lollipop man and is busy preparing for a meeting of his magician's club. However, he keeps getting hoax calls from the fire brigade and his magician club meeting doesn't quite go to plan, leaving Patrick and Pippa even more concerned about the sanity of their neighbours than ever before.

The picture is reasonable enough with a fair amount of colour and detail. The bit-rate remains around average and there's no real signs of artifacting or outlining, although the can be a little too much contrast at times. However, the picture can also exhibit a fair bit of grain, probably due to the age of the film stock, but it still manages to be far superior to anything that video could offer.

The 192 Kbps 2.0 soundtrack is nothing special, but then again it is a thirteen year old television series, and it is a BBC series after all. Never the less, the stereo soundtrack is more than sufficient for its needs and, along with the plentiful supply of laughter from the audience, you can hear Victor's ramblings with ease. Mind you, it can still be hard picking out the dialogue as you tend to be laughing so much yourself.

If you discount the Christmas One Foot In The Algarve episode, the only extra on the disc is a commentary track on the Hearts of Darkness episode with Richard Wilson and series writer David Renwick. Why there are no other commentaries is a different matter, but rather fortunately, the single commentary track is for my all time favourite episode. Over all, it's a reasonably interesting one and a fair amount of information flows between the two of them as they discuss the script and the minor production issues (which Renwick rather hoped that the audience wouldn't notice).

As a five times winner of Top BBC Sitcom, One Foot In The Grave has won an enormous amount of awards including BAFTA's, British Comedy Awards, Royal Television Society Awards and Writers Guilds Awards. At its peak, the series regularly topped the UK television ratings with up to 18 million viewers whilst the extended Christmas specials pulled in over 20 million viewers. And it's very easy to see where the attraction is. The script writing is simply brilliant whilst Richard Wilson played his Victor Meldrew character wonderfully (and I'm sure we can all relate to someone like him too). It's also a character he was desperate to put to one side and prove that he can be a serious actor too. But no matter which role he takes, you can always be assured that you'll picture him exclaiming his famous "I don't believe it!" line.

This two disc DVD set includes the ninety minute 1993 (yes, it really is that old!) Christmas Special episode One Foot In The Algarve and, as such, it is a collection than runs much longer that the length of the series originally broadcast on BBC1. It's also great to find the Christmas Special in the collection too, as it's fairly normal to find these sorts of specials available as a separate, and expensive, purchase. So there's a hearty pat on the back for Auntie Beeb for providing fans with a full complement of episodes, and at a reasonable price too. It's just a pity that more of the episodes couldn't have included an audio commentary from the cast.

Every now and again the British manage to bring to life some home grown comedy that beats just about every other import into whimpering submission. With series creator David Renwick's sublime scripts that manage to combine a plot with side-splitting dialogue and wonderful black humour, the multi-award winning One Foot In The Grave must surely find a place amongst other British comedy gems such as Black Adder, Fawlty Towers, Rising Damp and Father Ted.

Series four is probably the peak of the series and it includes my all time favourite episode Hearts Of Darkness which sees Victor getting his revenge on the evil staff of an old peoples home. And lets also not forget, it's the same classic comedy episode where he and Mrs. Warboys manage to get their feet stuck in a bag of cement. It never fails to make me laugh. The Christmas Special is also a bit of a corker too with Peter Cooke providing one of his last ever television appearances.

So, sit back and enjoy this comedy classic that will have you in stitches over and over again. It's all wonderful entertainment and it comes highly recommended, even without any real extras of note.