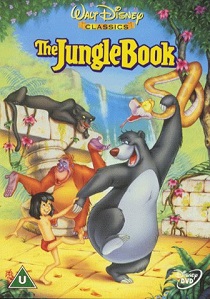 ReviewAnimation
Review Article Go back to homepage
Mowgli, a young boy raised by wolves, is urged by his panther friend, Bagheera, to seek safety in the man village. However, he feels at home in the jungle and soon meets Baloo the bear and meet many friends along the way back to civilization.
Mowgli, Bagheera, Baloo, Shere Khan, Kaa
Animation
2
1 Hour 15 Minutes
Thank you for supporting DVD365.net when you order using the link(s) below.
Buy DVD
Story

Mowgli is an orphaned baby who was been raised in the jungle by wolves. Life in the jungle is sweet for Mowgli until he is ordered to return to his own kind when his presence in the jungle attracts the attention of Shere Khan, a tiger with a bad reputation.

Resisting the calls for his returns to civilization he abandons his friend, and guide, and discovers Baloo, a lazy, but lovable, jungle bum bear. Mowgli soon finds himself in trouble when he is kidnapped by monkeys and also finds himself hunted by the hypnotic snake Kaa, plus there is always the danger of being discovered by Shere Khan.

For the age, and type, of the film we could hardly expect thunderous bass or surround of Tarzan, but what we have here is sufficient to hear all those classic songs, such as the Oscar nominated "The Bare Necessities" The digitally remastered picture is surprisingly good with no artifacting and a constantly high bit-rate throughout the film and it even kept my cats attention for ages.

When you consider the amount of computer wizardry which goes into producing today's animated films, you just have to watch this films excellent animation to understand the amount of time and effort each frame must have taken to produce.

Jungle book is only second to Snow White as one of the most popular Disney titles ever, and it is indeed a classic title which deserves far more than we have received here. There are no extras what-so-ever and it is only full screen. Compared to the efforts which have been made on newer Disney titles I get the impression that this is just another minimum effort for maximum profit disc.