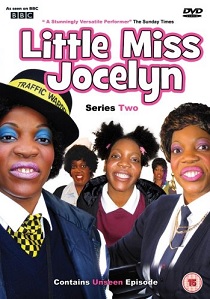 Making a name for herself on BBC3 with the hit comedy series 3 Non-Blondes, show member Jocelyn Jee Esien was given her own show. The resulting solo debut on BBC3, Little Miss Jocelyn, was a provocative sketch show in which she played over 20 characters. The show became an overnight success and saw it gain the highest rated new series in the history of BBC3 and increased the slot average by a whopping 86%. The ratings success was so staggering that a second series, and a move to a more accessible audience on BBC2, was commissioned mid-run.

As well as the returning favourites like Jiffy the traffic warden, the second series introduces a number of new characters. New and existing characters include Helen (a woman with worms who is often seen sat on the floor rubbing her by buttocks across the floor), Fiona (a middle-aged woman who works in an office and spends most of her time trying to hide the fact she's black), Mrs Omwukwopopo (a Nigerian women who is constantly in marriage counselling with her several husbands), Ignatius (a fat, and elderly, unlicensed male driving instructor for the Nigerian School Of Motoring), Florence (a Voodoo nurse who uses who uses Juju to help people lose weight), Sheson (a Cockney-Carribean bus driver who insults all of her passengers), Madam President (the first black president of the USA), Paulette (a spoilt middle-aged woman who screams and cries when she doesn't get her own way), Gladys Kingston (a man hating old Jamaican woman) and Liz (Prince William's new girlfriend who's not quite to everyone's taste).

The picture quality is good, with a large array range of colours on show - especially from some of the richly coloured costumes that Jocelyn uses in the series, but given that its origins is terrestrial television the picture doesn't do anything to make it stand out from the crowd. But then again, since this is a comedy sketch show, and probably one made to a tight budget, there is very little else needed in the form of fancy camera work or large scenic pans.

Due to the bandwidth limitations of a terrestrial television broadcast, and the fact that the BBC is restricting its HD output to more "mainstream" material, the 224Kbps two channel Dolby Digital soundtrack is nothing special. Never the less, the dialogue is crisp and clear whilst the laughter from the audience isn't too distracting. Whilst there are a few benefits in feeding the audio through a surround system, you can save yourself a few valuable pounds worth of electricity by dispensing with the surround system and, assuming you have them, using the speakers in your television/projection system instead.

The menu is animated and scored with the series theme music. Whilst the episodes can't be viewed all in one go, the seven episodes can be individually selected from its own menu. Each sketch within the episode is also chaptered although, for a series from the BBC, there is surprising lack of subtitles. Extras wise, the press release mentioned an extra Unaired Episode but, having not watched the original broadcast, I don't know whether this is the seventh episode on the disc or something that is only on the retail version (the disc I received was a preview copy - which may also account for the lack of subtitles). However, what is included, are two Behind the Scenes featurette and a rather useful Character Select facility that will only show you the sketches containing your selected character.

Running for twenty-three and twenty-one minutes respectively, fans of the series are bound to enjoy the two Behind-the-Scenes featurettes that show Jocelyn getting into her costumes and being plastered with make up, messing about in character on set whilst there's a number of hidden camera scenes where poor members of the public are completely baffled by her antics (quite how Jiffy the traffic warden was never "lamped" by an irate driver I'll never know). All in all, it's a good collection of extras that are sure to appeal to her many fans.

Jocelyn Jee Esien is the first British black female to have written and starred in her own comedy series on UK television, and it's attracted a rather large following. However, I often wonder with series such as this - which spends most of its time poking fun at some of the black stereotypes - is just a little "un-PC". This is made all the more remarkable when you consider that it comes from a BBC that simply falls over itself to be as PC as possible. But then again, isn't this series as PC as you can get? Never the less, I do enjoy a comedy show that dares to be different - and that's the whole point of it.

Whilst shows such as Black Books, Blackadder, Father Ted, Nathan Barley and Peep Show will always get me laughing out loud, try as I might, I failed to laugh at a single sketch on the show. In fact the same characters over and over again soon became rather boring. However, I do get the series as, week in, week out, Jocelyn takes no shame in mocking racism. Like her or loathe her, she even has the guts to lampoon Britain's popular black culture - and those who pretend to understand it.

Whilst I didn't find the show funny, thousands obviously do - otherwise it wouldn't be a ratings hit with a DVD release too. If you're already a fan of the series then you'll be wanting to get hold of this DVD and it's fan friendly extras. However, for everyone else, you're probably best sticking with Mitchell and Webb.