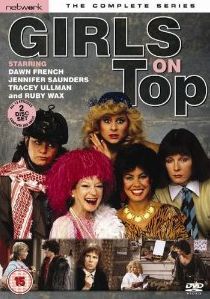 I dare say that most people who rent houses or apartments have discovered that it can be quite hard to find suitable places. As a result, there tends to be quite a few people chasing the more sought after properties - especially in and around London. So when Amanda Ripley, a feminist writer who works for the women's magazine "Spare Cheeks", finds an apartment in Kensington she jumps at the chance - after all, she's being waiting for one for such a long time she'd become a bit of a fixture at the rental agency office.

The apartment is owned by Lady Carlton, the crazy gin laced romance novelist (with a stuffed pet dog named Josephine that she takes for a daily walk) who lives downstairs. She is rather keen to get her hands on the rent - after all, there's gin to be purchased, so when a friend of the previous tenant turns up and relieves Amanda of her purse containing the rent and the safety deposit, she has little other choice than to find some other flatmates to help pay the rent before she looses the apartment to someone else,

As a result, she has to take in the motor-mouth, manic, and spoilt brat actress Shelley DuPont who has arrived in Britain (with much thanks to Daddy's money) to make a name for herself. Then there's Jennifer Marsh, an old friend from childhood who's a total bore and a bit slow on the uptake. Finally, there's Candice (pronounced Candeece) Valentine, the scheming disco diva who was the previous tenant with nowhere else to go. All Amanda needs to do now is to get her new friends to share in her feminist values.

The picture transfer is of a fair quality, but for a low budget television series - and something of this age too - it is something that I was expecting and it's not too unusual to see in material such as this. Still, I dare say that the quality is ever so slightly better than the original television broadcast, even if it's still rather washed out and devoid of any real colour depth or detail. Never the less, it's more than sufficient for its needs and, if you've not set your expectations too high, it's more than watchable.

You can't go expecting some explosive Dolby Digital 5.1 soundtrack from a twenty year old television series, and since the series pre-dates the NICAM revolution by some five years, the thought of providing a stereo soundtrack was probably the least of production teams worries. So, what's presented here is your rather average Dolby Digital 2.0 192Kbps soundtrack that's not really worth while writing home about. Still, once you cut through the rather woolly audio levels, the dialogue is reasonably clear whilst you can also enjoy the extremely annoying opening theme tune.

The series is presented across two disc with the menus that are static and silent affairs with the ability to play all, or select individual episodes, for viewing. Extras wise, the only thing on offer are two rather pointless interviews with Tracy Ullman and Ruby Wax that don't even bother to mention the show in question. I've no idea why these have been dragged from the archives, and there's not even a mention of any of the other cast members.

Disc one contains the eight minute Interview with Tracy Ullman. Presented by Gloria Hunniford, the rather pointless and unfunny interview rambles on with nothing particularly interesting to say. Disc two contains another unfunny seven minute Interview with Ruby Wax from the London focused 6 O ' Clock Show with Michael Aspel. Again, it doesn't actually reveal anything of interest - although it does include a rather shockingly slim and young looking Danny Baker and Chris Tarrant.

As the series was filmed way back in 1985, and let's be honest here, it wasn't a series that sticks in the mind too much (although, given it was written by the producers of The Young Ones, there are many similarities) it's interesting to fast forward twenty years to see just what the original cast members are doing now. For starters, I've listed the rather unknown actor Alan Rickman as Dimitri in the credits. Whilst he may have only briefly appeared in two episodes (blink and you'll pretty much miss him - let alone recognise him) it's safe to say that he's gone on to much bigger things (even eclipsing the likes of Tracey Ullman - and the rest of the cast for that matter). And speaking of Tracey, and her rather massive - and totally baffling - career in the USA, you have to thank her for getting that little known The Simpsons family going.

Then there's Dawn French and Jennifer Saunders - and the most likely reason for Network deciding on purchasing the rights for this DVD release. They've been at the forefront of British comedy talent for years, and even though they have an extremely successful BBC comedy sketch show, they've also worked on their own projects. This has resulted in some of the best comedy ever to grace our screens with global hits in the form of Dawn French's classic Vicar of Dibley (albeit written by Richard Curtis) and Jennifer Saunders' hilarious Absolutely Fabulous (written by both Jennifer Saunders and Dawn French).

Unfortunately, Joan Greenwood died a few years after Girls On Top finished whilst American comedienne Ruby Wax has the annoying ability to still keep popping up on British television and grinning with her massive mouth of teeth at every opportunity. I can only assume that she was expelled from America for being unfunny and ended up being washed ashore in England and, like the dumb and accommodating people that we are, we gave her a towel and took her in. Unfortunately, no matter how much hinting we do, so never seems to go away.

Whilst Girls On Top is not the most classic of comedy series you'll ever see, it's never the less an interesting one for fans of French and Saunders and their early material. Still, I'll admit to sitting in stony silence and not finding anything remotely funny (then again, French and Saunders' early material was a little "too out there" for me anyway). Never the less, putting my finicky humour aside for a moment, I'm sure that there'll still be a quite a few people who'll be having a good old laugh. As a result, it's really only a series for fans.