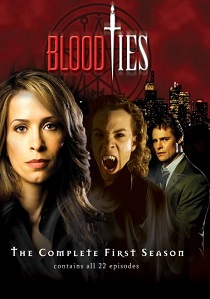 Blood Ties, is a supernatural crime series with an unusual twist. Similar to Buffy the Vampire Slayer and Forever Knight, it's a real chiller-thriller of a series which consists of twenty-two episodes (made up of twelve episodes from season one and ten from season two). As a series, Blood Ties has everything you're average Buffy the Vampire Slayer loving fan is ever going to want - vampires, supernatural mysteries and a love triangle that Jeremy Kyle would have kittens over.

After being diagnosed with retinitis pigmentosa, Victoria 'Vicki' Nelson faced the hard choice of either leaving the police's Homicide Division and working a boring desk job or quitting the force all together. Despite strong protests from her partner and ex-boyfriend, Detective Mike Celluci, she decided to leave the force and open a private investigation firm. But when a series of bizarre murders have the police totally confused, and Vicki witnesses a strange and apparent demonic murder, she finds herself face to face with Henry Fitzroy.

Born the bastard son of Henry VIII of England, Henry Fitzroy chose love over family duty and sacrificed his mortal life to remain forever as a vampire. After 450 years of existence that even Highlander would have grumbled at, Henry now lives in Toronto as a graphic novelist. But his quiet life and true identity takes on a new twist when, whilst attempting to stop a man from bringing a demon into the world, he meets Vicki Nelson and the pair team up to battle the forces of evil - and they're not just forces from the mortal world either. But that's not the only partnership that is formed as Henry falls for Vicki and, after 450 years of dating experience, Vicki finds his advances too hard to resist.

The picture is reasonable enough with a fair amount of detail and colour depth. However, its quality is better than most television series you'll see on DVD, but being an NTSC to PAL conversion of a terrestrial television series from Canada for the big money American market, it does occasionally suffer from the usual problems with grain, excessive amounts of contrast and colour bleeding. Unfortunately, given the large amount of time the series spends in the dark, with enough dark and gloomy locations to challenge your average X-Files episode, the transfer can be a little challenging at times with fair amounts of pixelisation.

As a terrestrial television series it is hardly surprising to discover that the sound is presented as a simple 192 Kbps Dolby Digital 2.0 soundtrack. Never the less, even given the amount of compression required to get the entire fifteen hours worth of programming onto five discs, it works well enough and the dialogue is crisp and clear in the front channels whilst the rather catchy (and familiar sounding - although I can't place it) theme music is also handled well. It would have been nice to have had something more from the sound department, but given the possible budget constraints for the production and actual DVD release, you can't really complain too much.

The menus across the five discs are fairly basic but animated and scored with the theme music from the series. Extras wise, there's absolutely nothing on offer - not even any subtitles for the hard of hearing. Still, this is essentially a budget release from Contender Home Entertainment so the scope for adding extras, and indeed subtitles, is an expensive diversion from what would normally be a series that wouldn't find its way to DVD. Whilst the fans will no doubt be annoyed by this lack of extras, and a RRP price that is pushing £40, the fact you've nearly got sixteen hours of entertainment will go some way to keep you happy.

Blood Ties is based on the global bestselling Blood book series by Tanya Huff which has sold in excess of five million copies worldwide. Created for television by Peter Mohan and Sci-Fi veteran David Winning, who directed four episodes in this first season, the series already has a strong fan base. However, with the American networks unsure of whether to continue showing the series, its very existence is under threat. Is this yet another television series heading for the great cutting room floor in the sky?

However, all hope is not lost. As it's a Canadian series there's a good chance it won't be lost forever. The internet is full of talk of the series returning in some form, but it looks like it all hangs on the usual tricky finances from a potential network. Whilst it doesn't look like a US network will pick up the challenge, if another Canadian network picked up the pieces then a US broadcaster would be sure to take an interest, especially since the Canadians aren't affected by the writers guild strike - always a bonus when the schedules are looking a little empty of full of repeats (that sounds like an evenings viewing on BBC1!)

As with the cancelled Twentieth Century Fox series Tru-Calling, whilst the later episodes in the series do become weak and hard going, the overall theme and basis for the series is sound and worthy of further exploration. Surely there's still some room for our immortal hero and feisty private detective to continue fighting demons and the general scum of society?