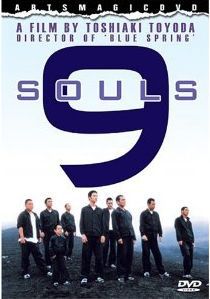 ReviewComedyDramaWorld Cinema
Review Article Go back to homepage
When a bomber, a patricide, a mad biker, and a pornographer, together with various other forms of social detritus, break free from jail, it is not surprising that mayhem follows in their wake.
Yoshio Harada, Kee, Kôji Chihara, Onimaru, Mame Yamada, Ryuhei Matsuda, Takuji Suzuki
Drama, Comedy, Eastern Cinema
1
1 Hour 59 Minutes
Buy DVD
Story

Michiru is a young man who has spent most of his life shut inside his room with little or no contact with either his brother or father. But one day after overhearing a particularly nasty argument between them he finally cracks and murders his father. Found guilty of his crimes he is sent to prison and placed in a communal cell along with another nine men. But sharing the cell with yet other person becomes too much for one of the overcrowded prisoners and, after finding hair in his food, he finally breaks down and starts to shout abuse at both his fellow prisoners and the guards. But before being dragged away by the guards he babbles something about a huge cache of of money hidden in the time capsule at the Mount Fuji Elementary School.

But it not too long before the cells occupants is increased back to ten, although this time it is of the four legged kind, when a mouse finds its way into the cell. Finding the hole in the floor it doesn't take long before the nine remaining prisoners have escaped and are on the run (although how they managed to escape via a mouse hole will forever remain a mystery to be answered on another day). But rather than splitting up and heading their own ways the nine men, with talents such as a bomber, a patricide, a mad biker and pornographer, decide to stick together. They soon hijack a rather battered looking camper van and, finally equipped with a means of transport, the ragged group set off to retrieve the bounty from the time capsule at the Mount Fuji Elementary School.

Following Torakichi, the self appointed and no nonsense leader of the group, through the countryside this band of so called vicious criminals are surprisingly law abiding, and they even worry about who has a valid driving license. And rather than smashing vending machines or robbing every eatery in sight they even pay for their meals and respect just about everyone and everything they encounter (although a flock of sheep to a group of men deprived of women for so long is a bit of a temptation too far). But as the rather unconventional road trip continues both the viewer and the nine men slowly start to learn more and more about each other as they go about their individual journeys of discovery and redemption.

Being now accustomed to reviewing Japanese film's which have been made on shoe string budgets, resulting in poor quality and noisy transfers, it is all the more satisfying when you come across a release where the picture quality is vastly improved over previous releases, and even embarrassing to some of the bigger budget Hollywood titles too. From the moment the film starts you know you're about to watch something special as, not only is the image crisp and sharp, the initial cityscape fly past is visually stunning. Both of these appear to indicate an impressive director at work and signs of a good transfer.

Generally, the transfer is clean and sharp with a good level of detail throughout. Colours are rich and vibrant throughout whilst there are no real problems with either artifacting or outlining. Still, the transfer is far from being problem free. Whilst black levels are generally good, images in some of the darker scenes can become a little indistinct at times and it can be a little hard to work out what is going on. There is also the very occasional problem with print damage, but if you compare this to some of the other Japanese titles on the Artsmagic label, such as Full Metal Yakuza and Young Thugs : Innocent Blood, then you really can't have any complaints about the transfer.

Given that the film originates from Japan you'll be hardly surprised to learn that the 448 Kbps 5.1 Dolby Digital soundtrack is presented in its native Japanese. Even though I had to rely on the overly large on-screen subtitles, the dialogue is crisp and clear in the centre and front channels whilst the surround channels are used to a reasonable degree. However, that Japanese obsession with over exciting and over powering music continues, with a loud rock soundtrack that blasts out of your speakers at every opportunity. Still, I'm not complaining this time as this audio score is quite impressive and it really helps to add an additional dimension to the film.

The menu system is simply animated and scored with the music from the opening section of the film whilst everything is clearly laid out and easy to navigate through. Extras wise, considering the rather good extras on other Artsmagic titles such as Sabu and Young Thugs : Innocent Blood, the collection on offer here are a big disappointment. Still, fans of the film will be able to find something of interest in the director interviews and biographies.

The main extra on the disc is the Full-Length Commentary with Tom Mes, an acclaimed writer on Japanese cinema. However, it's easy to forget that it's there as, rather than being presented on the extras menu, you have to select it from the sound Setup menu instead. Still, once selected, Tom offers a reasonable amount of information on the film, the director and the actors as well as some valuable insights into the Japanese culture, especially the prison system which helps to explain why the initial group are together. However, it can be a little hard going at times with his monotone voice becoming a little tiresome at times. Still, if you can put this minor quibble aside then a second viewing with the audio commentary enabled is certainly a worthy proposition.

The thirty-eight minute Interview with director Toshiaki Toyoda is a bit hard going at times and it doesn't take long for the female interviewer to not only confuse herself with the over elaborate questioning, but looses Toshiaki Toyoda in the process. This overly long interview spends more time getting to know the director personally as well as finding out his influences and method of working. It's certainly interesting, but given that it runs for such a long period of time there are no chapter stops between each question thus making it rather difficult to return to a particular point in the interview. Concentrating on the film, the second six minute interview with a different interviewer is far more interesting and Toshiaki Toyoda reveals his influences for the film, including The Great Escape and a real event which happened in Texas when a group of convicts escaped from prison in van and stayed together throughout their days as fugitives.

As is usual for Artsmagic releases the extras include a comprehensive selection of textual biographies for the director and some of the cast members, although given that it's a story about nine people there's only information on seven of the actors. Some of the actors have numerous pages of previous work whilst others are restricted to a number of lines on a single page. Whilst it's not the most fascinating of information, and only then is it of any real use to the die hard Eastern cinema fans, someone has gone to the trouble to do a spot of research for the DVD release and it's interesting to see what the various actors have been up to during their career. Still, information on those extra two actors would have been a bonus.

The Promotional Material is a bit of a disappointing waste really. Although there are two pages of interesting looking images in relation to the film unless you can read Japanese, and have very good eye sight, then they are not going to be of much to you here. Past Artsmagic releases have provided the ability to highlight and translate the various pieces of text from Japanese into English. Unfortunately this useful facility is not provided in this release and as such renders this extra rather pointless. Things are rounded off with the Theatrical Trailer. People can continue to argue that it's simply filler material, myself sometimes included, but since most Japanese trailers tease you with so much more detail than the usual Hollywood efforts, it's great to see it included here.

Once in a while a film comes along which manages to blow you away. Whilst Hollywood is capable of producing the very occasional gem, such as The Matrix, it is usually left to the smaller independent companies who continue to struggle on the crumbs left over from the big budget blockbusters. However, now a certain Japanese film called 9 Souls can proudly add itself to that impressive list of outstanding films. From a film that gives the impression of being a typical Japanese comedy caper, something all the more remarkable is born. And it's a masterpiece which surely must raise the spectre of a big budget Hollywood remake in the near future.

There can be few films where the various characters have carried out such despicable acts of violence, murder and robbery, and yet you still end up sympathising with their attempts to find forgiveness and some sort of normality within society. Whilst the extras are not up to the usual high standards we've come to expect from Artsmagic releases, with a film such as this coming along so infrequently, frankly, who cares. With Blue Spring already under his belt, director Toshiaki Toyoda has managed to produce something astonishing, if a little weird at times, and I'm sure it's a name you'll be hearing more of in the future.

Do yourself a favour. If you only ever buy yourself one foreign language film, just make sure it's 9 Souls. It's remarkable viewing and an even more remarkable coup for the ever daring Artsmagic label. Highly recommended.

Epic is a 3D CG adventure comedy that reveals a fantastical world unlike any other. From the creators of Ice Age and Rio, Epic tells the story of an ongoing battle between the forces of good, who keep the natural world alive and the forces of evil, who wish to destroy it. When a teenage girl finds herself magically transported into this ...
Movie quote