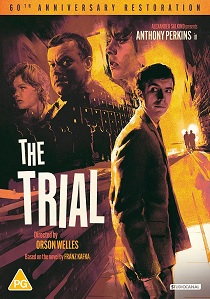 One of Orson Welles' most well-crafted masterpieces, The Trial has been beautifully restored for its 60th anniversary. Based on Franz Kafka's novel, it is a masterclass in tension building and avant-garde filmmaking featuring outstanding performances by Anthony Perkins, Orson Welles, Jeanne Moreau and Romy Schneider.

One morning, Josef K. (Perkins) is arrested but has no idea what crime he is accused of. Completely stunned, K. slowly finds himself trapped in a dehumanised nightmare and realizes he is the victim of a grotesque plot. He is accused by everyone, friends and enemies, until, worn down, he ends up doubting his own innocence.

Welles brilliantly captured the oppressive and nightmarish qualities of Kafka's fictional world. Using the cracked labyrinthine corridors of Paris' ruined Gare D'Orsay as his set, with icy black and white photography full of disorientating camera angles and unconvential use of focus, Welles' strikingly depicts the spider-and-fly games of an ineffectual man struggling against his inescapable fate.

The Trial aptly illustrates why Welles is often cited as the greatest director of all time and on completing the film he himself stated "The Trial is the best film I have ever made".

The Trial is released on DVD, Blu-ray and 4K UHD 21st November 2022 from StudioCanal.

BD
In Brian And Charles, released on DVD and Blu-ray 10th October 2022 from Mediumrare, an inventor lives alone in a remote village in the countryside, inventing useless things out of found objects in his garage. That is until ... END_OF_DOCUMENT_TOKEN_TO_BE_REPLACED
Top PicksView