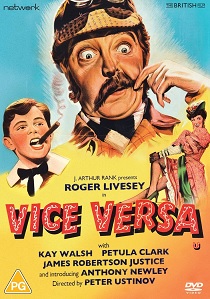 Roger Livesey and a very young Anthony Newley star as a Victorian father and son who accidentally swap bodies after a foolishly casual wish made in the presence of a magical Indian artefact. Written and directed by filmmaker, wit and raconteur Peter Ustinov, based on a Victorian novel, Vice Versa is featured here as a brand new high definition remaster from original film elements in its original theatrical aspect ratio.

During a heart-to-heart with his son, pompous businessman Paul Bultitude envies his schoolboy son Dick's youth, while Dick wishes he were grown up. They both get what they wish for when, magically, the son becomes the father (and vice versa) - a situation that soon causes consternation and uproar!

Vice Versa is released on DVD and Blu-ray 5th September 2022 from Network.

DVD
After more than thirty years of service as one of the Navy's top aviators, Pete 'Maverick' Mitchell is back where he belongs as Top Gun: Maverick flies onto DVD, Blu-ray and 4K UHD 31st October 2022 from Paramount Home ... END_OF_DOCUMENT_TOKEN_TO_BE_REPLACED
Top PicksView