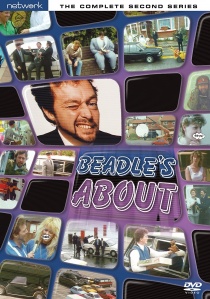 Jeremy Beadle established himself as a master practical joker and one of the nation's favourite comedians. In the 80s, the legendary prankster went on to present outrageous stunts and hystericalmoments captured on camera with the phenomenally successful LWT show - Beadle's About The Complete Second Series - will be available to buy on DVD for the very first time on 2nd April 2012 from Network DVD.

For ten hilarious and unforgettable series between 1986 and 1996, Beadle's About set upunsuspecting members of the public for some of the most elaborate and brilliantly executed pranks ever shown on television, capturing the victims' horrified reactions on hidden cameras; this is also long before the currentslew of reality shows. The show instantly became essential Saturday-night viewing in millions of homes and the topic of countless Monday-morning conversations at work and school.

Now you can watch some of Jeremy's most infamous pranks in eight shows from 1987 in which the surprises include an incredible expanding man, exploding golf balls and an amazing never-ending holiday menu. An English motorist gets on the wrong side of French police, while a pair of Andrew and Fergie lookalikes cause serious confusion; and then there's a rather unfortunate incident involving a tank and some parked cars...

UHD
The end of the line is only the beginning in a wild, non-stop thrill ride through modern-day Japan as Bullet Train is released on DVD, Blu-ray and 4K UHD 24th October 2022 from Sony Pictures Home Entertainment END_OF_DOCUMENT_TOKEN_TO_BE_REPLACED
Top PicksView