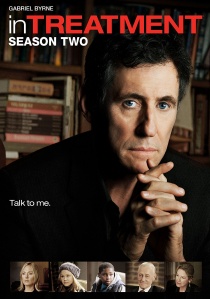 With new patients this season, In Treatment continues to be one of the most intriguing and thought-provoking drama series' on television. Gabriel Byrne returns as the therapist who exhibits an insightful, confident demeanor when treating his patients, but displays a crippling insecurity while counseled by his own therapist.

Sit back and enjoy this unique TV experience set within the confines of the therapist's office as four new patients reveal their deepest thoughts and anxieties. Each story is played out over the course of seven weeks with each appointment anchored on a specific day allowing viewers to follow a specific character in weekly instalments or watch from start to finish.

Psychoanalyst Paul West, played by Golden Globe® winner Gabriel Byrne (Assault on Precinct 13, The Usual Suspects) has relocated to Brooklyn, New York and finds himself divorced, lonely and missing his family. The addition of a potential malpractice law suit sees Paul slowly unravel and rely on the mentorship of his own therapist Gina (Academy Award ® winner Dianne Wiest). In the wake of his separation from his wife Kate (Michelle Forbes - True Blood), who is more vulnerable; the professional or the patient? The critically-acclaimed series gives an intimate look at the tangled mind of a man who counsels others for a living.

Mondays: Mia (Hope Davis - The Special Relationship, Arlington Road) - A successful litigation attorney whose firm is handling Paul's malpractice suit, Mia also happened to be a former patient of Paul's. Childless, single and 43, she still harbours unresolved feelings and resentments towards Paul for moving away from New York.

Tuesdays: April (Alison Pill - Scott Pilgrim vs The World) - An architect student, April is facing a serious illness but is unwilling to seek assistance from friends or family. April engages in a complex push-pull relationship with Paul, both refusing and desperately needing his help.

Wednesdays: Oliver (Aaron Shaw - Dirty Laundry) - Things are tricky enough for the shy, overweight Oliver as he faces bullies at school. But it's the stress of his parents' divorce, played by Sherri Saum (Men of Honor, Er) and Russell Hornsby (Lincoln Heights) that brings him to Paul's office. As Paul tries to help the trio navigate this tricky transition, he can't help but hear echoes of his own fractured family.

Thursdays: Walter (John Mahoney - Frasier) - A successful CEO who built his family-owned company from the ground-up, Walter comes to see Paul at his wife's urging because he is having trouble sleeping. Paul discovers that Walter is in denial over several other deeper issues, which come to surface when his usual business-logic fails him.

Fridays: Dr Paul Weston. (Gabriel Byrne - The Usual Suspects) Fragile, complex and depressed; not circumstances you would expect from such an insightful therapist yet Fridays see Paul lean on the support of his mentor Gina. In need of weekly counselling, Paul works through the stresses of a pending malpractice case and the aftermath of his divorce.

HotDVDBD
An impending apocalypse raises the stakes and shatters the boundaries of time and space in Marvel's Agents of S.H.I.E.L.D. - The Complete Fifth Season, arriving on DVD and Blu-ray 1st October 2018 from Walt Disney Home Entertainment. END_OF_DOCUMENT_TOKEN_TO_BE_REPLACED
Top PicksView