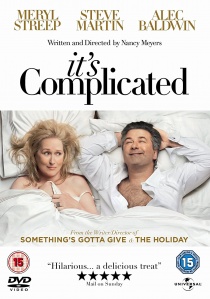 Acclaimed writer-director Nancy Meyers (The Holiday, Something's Gotta Give) directs an all-star cast including two-time Academy Award winner Meryl Streep, Steve Martin and Alec Baldwin in It's Complicated, a hilarious comedy about love, divorce and everything in between! Nominated for three Golden Globes including Best Picture, Best Actress and Best Screenplay, It's Complicated is released on DVD and Blu-ray on 10th May 2010 from Universal Pictures (UK).

Jane (Streep; Julie & Julia, Mamma Mia) is the mother of three grown kids, owns a thriving Santa Barbara bakery/restaurant and has - after a decade of divorce - an amicable relationship with her ex-husband, attorney Jake (Baldwin; 30 Rock, My Sister's Keeper). However, when Jane and Jake find themselves out of town together for their son's college graduation, things start to get complicated.

An innocent meal together turns into the unimaginable - an affair. With Jake re-married to the much younger Agness (Lake Bell; What Happens in Vegas, Boston Legal), Jane is now, of all things, the other woman. Caught in the middle of their renewed romance is Adam (Martin; The Pink Panther, Shopgirl), an architect hired to remodel Jane's kitchen.

Healing from a divorce of his own, Adam starts to fall for Jane, but soon realizes he's become part of a love triangle. Should Jane and Jake move on with their lives, or is love truly lovelier the second time around? It'scomplicated. With sparkling performances and a fizzing chemistry between Streep and Baldwin, It's Complicated is fresh, funny, life-affirming and makes for delicious escapism. A truly indulgent, feel-good treat that every woman can relate to, as well as a guilty pleasure for the man in her life - the perfect night in on DVD and Blu-ray!

HotUHD
Now more stunning than ever before, return to the stunning locations and epic adventures in Peter Jackson's Middle-earth in The Lord of the Rings Trilogy, arriving on stunning 4K UHD 30th November 2020 from Warner Home Video. END_OF_DOCUMENT_TOKEN_TO_BE_REPLACED
Top PicksView