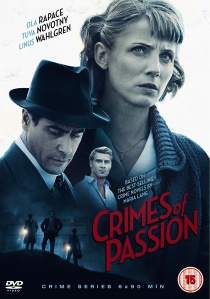 The series, currently airing in BBC Four's coveted Saturday evening slot, is based on six novels by legendary Swedish crime writer Maria Lang, whose work helped shape the renowned Murder Mystery genre in Sweden. Each of the six episodes will also be available via iTunes the morning after their BBC Four transmission.

The plot, brimming with thrill and intrigue, whisks you away to the beautiful and picturesque landscape of Bergslagen, where the classic 'whodunit' tales delve deep into the lives of main characters Christer Wijk (Ola Rapace), Puck (Tuva Novotny) and Einar Bure (Linus Wahlgren).

From the distributor that bought you Borgen, The Killing and The Bridge comes an unmissable new series, unlike anything we have seen from the Nordic Noir genre to date. Divided into 6 x 90 minute episodes, Crimes of Passion is filled with love, sex, intrigue, betrayal, secrets, lies, and death. It's a riveting classic Murder Mystery series with a contemporary twist.

UHD
Pixar Animation Studios serves up a breakthrough comedy with something for everyone as Ratatouille arrives for the first time on 4K Ultra HD 26th July 2021, exclusive to Zavvi. END_OF_DOCUMENT_TOKEN_TO_BE_REPLACED
Top PicksView