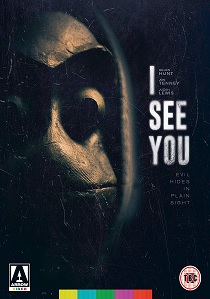 Up-and-coming British director Adam Randall (iBoy) returns with his new twist-heavy thriller I See You, described by the Hollywood Reporter as "a finely crafted exercise in slow-burn suspense".

Behind the seemingly perfect Harper household, Greg (Jon Tenney, True Detective), the lead investigator of a child abduction case, is struggling to come to terms with the recent infidelity of his wife Jackie (Academy Award® winner Helen Hunt, As Good As It Gets).

The already strained family harmony is further threatened when Connor (Judah Lewis, The Babysitter), their son, appears to be the victim of a mysterious malevolent presence in their house. As the secrets start to unravel, the plot threads prove to be more interlinked than it would appear at first glance.

Packed with audacious plot twists, beautifully orchestrated narrative flips and an outstanding lead performance by Helen Hunt, I See You is an eerie gem, where nothing is as it seems and the terrible truth behind a family's dark secrets might just be hiding in plain sight.

BD
In Disney's Mulan, released on DVD, Blu-ray and 4K UHD 10th November 2020, a fearless young woman risks everything out of love for her family and her country to become one of the greatest warriors ... END_OF_DOCUMENT_TOKEN_TO_BE_REPLACED
Hot PicksView

Fast forward to the 1980s as Wonder Woman's next big screen adventure finds her facing a wide array of foes including Max Lord and The Cheetah as Wonder Woman 1984 flies in on Blu-ray and 4K UHD 22nd March 2021 from Warner Home Video.
Movie quote