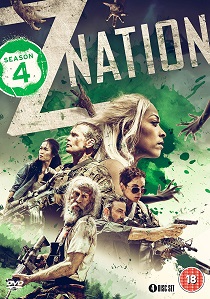 Over a vast apocalyptic landscape looms a Black Rainbow that stretches from horizon to horizon. A soft black rain is falling, but when the rain falls on Zombies and humans alike, it melts the flesh from their bones. Warren is there, screaming as the skin melts away from her skull then she wakes.

Season four begins 2 years in the future, just as Warren is waking from a coma to find that she, and a 'cured', flesh-toned, seemingly 100% human Murphy, have survived. The rest of the Team was scattered after the events of the season three finale. As Warren and Murphy find the others, they discover they may have lost one of their own; worse, one of Our Heroes may have delivered the deathblow.

Physically and psychologically changed, Warren is haunted by the prophetic dream of a Black Rainbow and a powerful compulsion to travel east. Unwilling to lose her, the Team follows, and with the help of new parents, Kaya and Citizen Z, Our Heroes discover the hidden meaning of Warren's dream, Zona's plan to cleanse the earth for their own use, and the nearly impossible tasks Our Heroes will have to complete to save all that's left of non-billionaire life on earth.

As if all that wasn't hard enough, the Zombie Virus has evolved again, the parasite spreading from the brain into all the remaining flesh, so that killing the brain no longer kills the Zombie; Mad-Zs must be totally obliterated, or they just keep coming.

There's no gas, hardly any bullets, and damn few people that aren't bug nuts crazy. Just a dream and a mission and a sliver of hope, as Warren leads the Team back across the American Apocalypse, uniting our core characters again, new evolutions of their old selves, on a single mission of hope.

All 13 Episodes from the Season Four of Z Nation is released on DVD and Blu-ray 22nd January 2018 from Spirit Entertainment Limited.